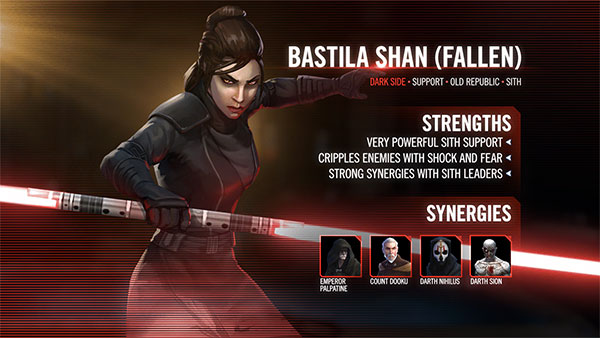 Welcome to the best mods for BSF, the latest article in our series about the popular game Star Wars Galaxy of Heroes where we take a look at the best mods for SWGoH characters. While I do not claim to have all of the answers in this game, I do my research and have used every toon I write about extensively. These are mod recommendations based on the character’s kit and actual gameplay to help you in your quest to dominate the Galaxy of Heroes holotables. 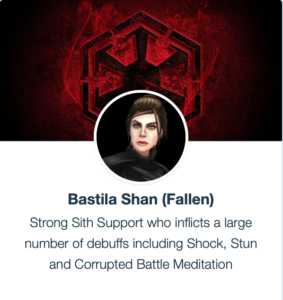 Today’s character to review mods for will be the Dark Side version of Bastila Shan in SWGoH, correctly referred to as Bastila Shan (Fallen), aka BSF. A non-canon character who is from the popular Star Wars: Knights of the Old Republic game Bastila is known for her Legendary Battle Meditation which was cleverly built into SWGoH as her unique ability for her Light Side version, and now also a part of her Dark Side kit. She fits into the Old Republic and Sith Factions in-game, and she does not have a Leader ability like her Light Side version. Let’s take a look at the best mods for BSF to make her more effective on your roster.

Main Focus: Speed. While the developers continue to try to shy away from the need for huge Speed on characters in SWGoH, it is still the necessary evil of Galaxy of Heroes at the time of this writing. There really is no getting away from Speed, and Bastila Shan (Fallen) is a character that, like her Light Side version, has a fantastic kit on paper and needs Speed in order to make the most of her abilities. Her Speed is even more of a factor with her Corrupted Battle Meditation unique which removes 3-6% Turn Meter from enemies at the start of her turn and causes her to regain 1% Protection for each debut on her enemies.

Additional Areas to Focus: Potency, Offense, Critical Chance and survivability in the forms of Defense and Protection. While Potency seems wise given her basic can apply the Ability Block debuff, remember that under certain Sith leads all Sith allies gain significance Potency (see Sith Eternal Emperor, Darth Traya and Emperor Palpatine). This does not mean to shy away from Potency as BSF is a much more effective toon with high Potency, but keep these stats in mind and note that her Sith Apprentice unique grants her +50% Potency with a Zeta. On the survivability side, Defense and Protection are the two areas of focus. Bastila’s Sith Apprentice unique grants +50% Defense to BSF and the leader of her squad, and her Corrupted Battle Meditation unique will see BSF regain 1% Protection for each debuff on her enemies at the start of each of her turns. So if you enhance both that Defensive boost will have more value and the added Protection, while not overly sexy on paper, feels like a stat that will add up in actual gameplay. Finally, Offense, CC and possibly CD are definitely worth building on, but I lean more toward Offense given her attacks deal Special Damage and her Special Offense CC stat is quite low.

Community Feedback: Wittster6 on Reddit added one of the best bits of feedback we have ever received shortly after her release, so I wanted to include it here. “After studying her kit I came to the same conclusion and modded her for offense and speed. A shardmate took the opportunity to do some testing against my EP setup and actually got destroyed with his regular 4man Revan team that’s good enough to hold off everyone else on the shard due to superior mods. He gave me some feedback and basically said her damage was negligible but her shocks and stuns were super annoying. He advised me to go for more speed/protection and just forget about offense. So I did and while at it, I looked into the optimal amount of potency to land stuns on Jolee, which could be game-breaking. Against Jolee’s base tenacity of 39 and +100 from his unique, a potency of 90(+35 from palp lead) is sufficient to have the maximum of 85% chance to apply debuffs.”

Speed Priority: 9/10 – BSF is definitely one of those characters you want with some of your best Speed mods, so consider her near the top of your roster along with Darth Revan.

In-game Mod Recommendations: Speed & Health. While Speed is important for BSF, I originally felt that either an Offense or Speed set could work for her. She has a base Speed of just 156, and I prefer to use Speed mods on toons with a 160-180+ base Speed. While Health does not benefit her kit in any special way, having a high Health stat (and a Crit Avoidance arrow) can be the key to ruining some popular counters in Territory Wars and the GAC for Sith Empire teams.

The “ideal mod setup” can be interpreted a few different ways. If you target Speed, Offense, Potency, Defense and Protection through the mods you should be able to maximize BSF’s kit. Here are my recommendations for the best mods for Bastila Shan (Fallen):