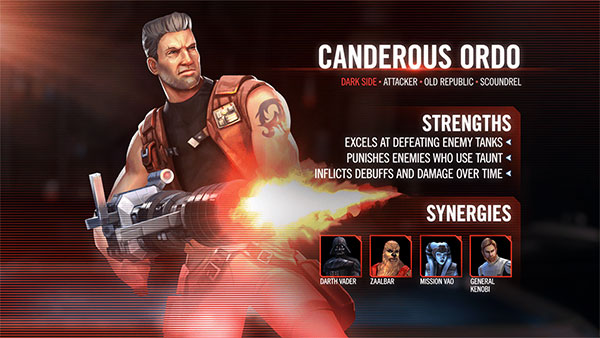 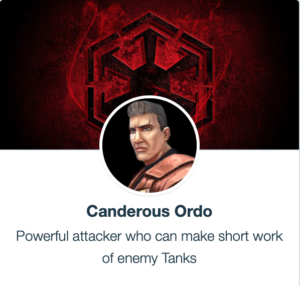 Today’s character to review mods for will be the Mandalorian War Veteran Canderous Ordo. A non-canon character who is from the popular Star Wars: Knights of the Old Republic game Canderous was introduced in November 2018 along with Bastila Shan (Fallen). He is an attacker who fits into the Old Republic and Scoundrel factions in-game, and does not have a Leader ability. Let’s take a look at the best mods for Canderous Ordo to make him more effective on your roster.

Main Focus: Offense. Canderous Ordo is described in the game as a “Powerful attacker who can make short work of enemy tanks,” and if you want him to do his job and do it well I suggest Offense as a major focus. His I Like a Challenge unique is very good on paper without the Zeta, so adding Offense will help both his basic and special attacks deal more damage and help Canderous regain more Health from his high Health Steal. Once he hits Gear 13 Canderous Ordo’s Relic improves his Offense even more with additional Physical Damage, CC and Accuracy as well as Armor Penetration and Resistance Penetration.

Additional Areas to Focus: Speed, Potency, Critical Chance, Critical Damage and survivability in the form of Health. While Potency will help his basic can apply the Tenacity Down debuff it will also help the special, Overwhelming Firepower, land Offense Down which can be quite valuable. However the true value of Potency for Canderous Ordo comes through his Mandalorian Veteran unique which states “whenever Canderous deals damage to an enemy, he inflicts a Damage Over Time (DoT) effect for 2 turns.” Then, in his I Like a Challenge unique he gains 8% Turn Meter whenever a DoT damages an enemy. When originally released I wrote “think Darth Vader or Wampa…,” but with Carth Onasi now in SWGoH, Canderous has an even greater value. Under Carth’s lead and paired with Mission Vao, Zaalbar and a 5th character, this combo got a lot of play from high-end guilds in Territory Wars for a while. Speed is valuable to help him get to additional turns, but if used correctly with other DoT applying allies, Canderous will not be nearly as reliant on Speed as other characters in SWGoH. CC and CD are of high value with Canderous Ordo since he is an attacker and the goal is to have him hitting hard when his turns come. When maxed with a Zeta, I Like A Challenge will grant him CC and CD up when an enemy gains Taunt, is Deathmarked or Marked, so a triangle with a CD focus is a must and high CC from secondary stats will enhance this. Finally, Canderous has a 10% Health Steal from his Mandalorian Veteran unique, so focusing on Health will be the most efficient use of the survivability stats based on his kit.

In-game Mod Recommendations: Offense & Tenacity. Offense and CC/CD make sense but Tenacity does not stick out as an area of focus based on the kit. Potency is an obvious choice and Health also makes sense given Canderous Ordo has the increased Health Steal when fighting alongside Scoundrel and/or Old Republic allies. Honestly, it’s silly to argue anything over Potency given the value of Potency to his kit and TM gain, so I strongly disagree with the recommendation of Tenacity over Potency.

The “ideal mod setup” can be interpreted a few different ways. If you target Offense and Potency first with Speed, CC, CD and Health through the mods you should be able to maximize Canderous Ordo’s kit. Here are my recommendations for the best mods for Canderous Ordo: