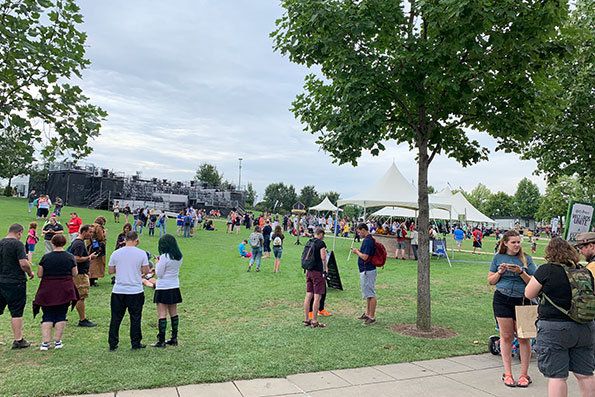 The first ever Harry Potter Wizards Unite Fan Festival took place today in Indianapolis, Indiana, and while real life has me heading home already, the experience in the short time we were there was a positive one. The event began with thunderstorms delaying the 9 am early entry by a full hour, but after the event got going it proved to be full of excitement, and plenty of compliments on my staff’s “Must Be a Weasley” shirts. Below is a recap of the event from our perspectives and some tips that may help those attending on Sunday as well as future HPWU Fan Festival events.

The White River State Park was a very nice and pleasant venue to hold an event like this. For those unfamiliar with it like I was, it is basically a huge park in the middle of a downtown area with multiple attractions surrounding it. The Indiana State Museum and their IMAX Theater, the Eiteljorg Museum and the NCAA Hall of Champions are along the park edge as you walk through, down, and around the the many walkways. In addition, Victory Field, home of the Indianapolis Indians, borders the park featuring the AAA baseball affiliate of the Pittsburgh Pirates, and the Indianapolis Zoo and Lucas Oil Stadium, home of the NFL’s Indianapolis Colts are nearby as well.

For the HPWU event, the park was segmented into four major sections featuring Dark Arts, Magical Games & Sports, 9 3/4 and finally Care of Magical Creatures along the walkway to the Indianapolis Zoo. The dragons we were to catch were for the most part concentrated in specific zones in a rather logical fashion with the Chinese Fireball (Emergency, Red Light) and its eggs found near the Dark Arts section and the Antipodean Opaleye (Severe, Orange Light) and its eggs located around the Care of Magical Creatures section. These two dragons and their eggs made up the Oddities III page. Meanwhile, on the Oddities IV page, the Common Welsh Green (Severe, Orange Light) and its eggs were concentrated around the 9 3/4 section and seemed to be the easiest to catch, while the Peruvian Vipertooth (Emergency, Red Light) and its eggs were in the Magical Games & Sports section.

The assignment and tasks were easily achievable by anyone putting in the time and effort. Given our schedule we rushed through them purposefully with a strong focus as we wanted to be sure not to miss out on anything in our time in the park and at the event. The first Assignment included the typical Special Assignment style tasks like Dine At an Inn 5 times, Pick Up 5 Chinese Fireball eggs, etc. The Second and Third Assignments proved to be the real challenges with #2 featuring a laundry list of items to complete.

This included finding 3-5 Foundables from of each of the 4 segmented areas above (Dark Arts, Sports, Magical Creatures & 9 3/4), walking 2 km, performing Great spell casts, using potions, etc. As you completed these tasks the portraits of the 4 Founders of Hogwarts were able to be caught and added to a new Moving Staircases II 9 3/4 Registry page. The fourth and final Assignment was purposely easy with creating a selfie portrait, taking a picture of a Foundable and adding a new Friend/Ally as the final items to wrap the event up.

While I am still not certain how Portkeys were supposed to be incorporated into the Fan Festival, we did find Portkeys colored green, red, blue and gray at the event and afterwards. Each was just 1 km and featured the Forbidden Forest with small XP and Spell Energy rewards, as well as dragon eggs. The Portkeys were not really incorporated into the event, and while we all received 3 free silver keys and then earned one in the second Assignment, these keys did not feel like they were needed for the event so we saved ours.

One notable item was the very high frequency of High, Severe and Emergency Foundables. The yellow, orange and red lights were everywhere, and placing images of the Sorting Hat, Buckbeak, Philosopher’s Stone, the Pensieve and more were made much, much easier. Foundables also seemed to be a bit easier to catch, however I still used well over 40 Exstimulo Potions personally.

Niantic is a company that continues to impress me both with their cutting edge technology and their understanding of their players. I have been impressed with many of the adjustments they have made since the launch of Harry Potter: Wizards Unite just over two months ago, and the staff was friendly and courteous. While the start of the event was a bit poorly communicated with our weather concerns, they more than made up for it when I asked them questions at their booth. In addition, less technical employees were in attendance helping with taking photos and answering questions as trivia, games and souvenirs were an option for those interested. I do not have answers on what will be done to makeup for the early entry tickets that were then delayed for half of their early entry time, however I am hopeful that it will be resolved in the coming days.

What We Would Change/Add

I mentioned the communication by Niantic when the weather delay held things up, but that mattered more to us because we knew we had a limited amount of time in the park today. While this impacted all of the early entry tickets who did pay a little extra, again I trust that this will be resolved in a fair manner in the coming days.

The eating arrangements were not something that we tested out as we packed snacks and ate after we left, but one things that would have been a nice touch would have been Butterbeer. While I do not know if that is supposed to be exclusive to The Wizarding World of Harry Potter at Universal Orlando, the addition of Butterbeer would have easily gotten this cheap traveler to open his wallet time and time again. 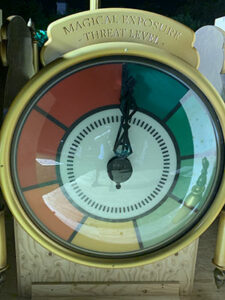 The final item we would change is that the real-life Threat Clock was rather underwhelming. We were hoping that it was somehow connected to the event and the items found at the Fan Festival, however this did not seem to be the case, at least not while we were in the park. Mustafar Nathan was hopeful that there was some kind of massive battle, more like a Raid in Pokemon Go! but we left disappointed in this as it seemed to be purely cosmetic, setup rather late (it was not assembled at 11 pm ET on Friday night) and had workers attending to it multiple times throughout the day and past 12 noon.

So to recap, the event itself, in my opinion, lived up to my expectations. The dragons were fun to see for the first time and to catch, and the venue made the event even more enjoyable. You can tell that Niantic is pretty good at putting these events on and the overall experience was a very good one. I am hopeful that another Fan Festival will be held in the Midwest in the near future so that we can plan to attend, and have some family fun, once again.

HPWU: The 5 Most Annoying Low & Medium Foundables to Catch from Traces