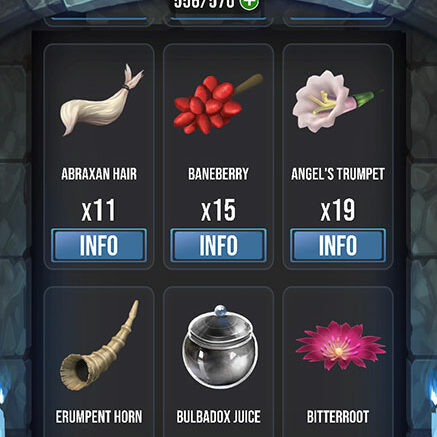 Harry Potter: Wizards Unite is a game that continues to evolve, and today we saw the addition of a new potion and five new ingredients. As we reported in late August, new potions were rumored in HPWU, and it appears that that rumor was at least partially correct. Here is a look at what is new in the game already:

Tonic for Trace Detection – This new potion requires four of the new ingredients listed below – Baneberry, Bulbadox Juice, Angel’s Trumpet and Erumpent Horn – and is described in-game that it “increases your perception of Trace magic, revealing more Traces as you explore.”

Baneberry – Described as “Berries of the Actaea plant, used as ingredients in Tonic for Trace Detection.”

Bulbadox Juice – Described as “A key ingredient in Tonic for Trace Detection, used for its breakout-inducing qualities.”

Erumpent Horn – Described as “An explosive ingredient of Tonic for Trace Detection.”

While we do not know if additional ingredients and potions are planned in the near future, we do know that there are a lot more ingredients that were used in the BETA testing in Australia and New Zeleand before the game’s global launch on June 21st, 2019.

Be the first to comment on "HPWU: New Potion & Ingredients are Live in-game"