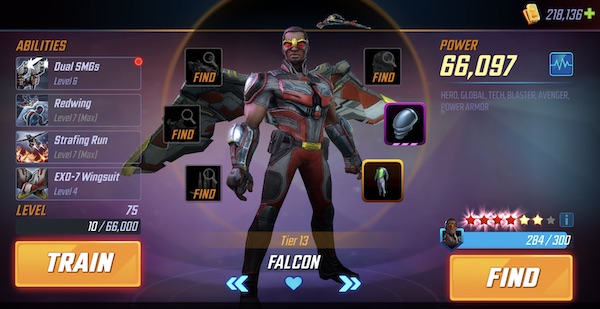 Welcome to the Iso-8 guide for Falcon, the latest in our series about the popular game Marvel Strike Force. In this series we look at the best Iso-8 enhancements for MSF characters. While some may refer to Iso-8 as simply “mods” like in other mobile games, we will look to stay true to the naming convention of the Marvel universe and the developers over at Scopely. We at Gaming-fans.com certainly do not claim to have all of the answers in this game, but we do our research and look to use every hero and villain we write about extensively. These are Iso-8 recommendations based on the character’s kit and actual gameplay to help you in your quest to dominate in Marvel Strike Force. Note that these Iso-8 classes may differ from one team makeup to another, so feel free use this as guide knowing that these can change in differing situations within MSF’s gameplay.

Today’s character to review is Falcon. One of the stars in an upcoming Disney+ series, Falcon is a Hero, Global, Tech, Blaster, Avenger and Power Armor character in Marvel Strike Force. Let’s take a look at the stats we want to focus on enhancing when Iso-8 modifications are added to the game.

Main Focus: Offense/Damage. Falcon is a very good character in Marvel Strike Force and has a ton of value as a damage dealer. He fits well on Tech teams for Raids and Power Armor for Alliance Wars and fills his role quite well. Because he deals very good Damage already, boost the power of his Strafing Run AoE attack by adding even more Damage to Falcon to enhance his strength.

At first we were learning how Iso-8 works in Marvel Strike Force, as a progression system with some customization for the characters, we can see that all characters gain Max Health at levels 2 and 4 in addition to the more custom stats. Now that we are used to the Iso-8 classes and modifications, the class that fits Falcon continues to be the Raider class. Despite the fact that Falcon’s kit does not call for specific CC/CD gains, as a Raider he can see gains in both stat categories as you level up which fits his highly offensive kit nicely. In addition, using Falcon on Power Armor teams including the Power Armor with Ultron to counter Emma & the Marauders in War, sees him fit the Raider class perfectly with the way the turn order plays out.

Be the first to comment on "MSF: Best Iso-8 for Falcon"