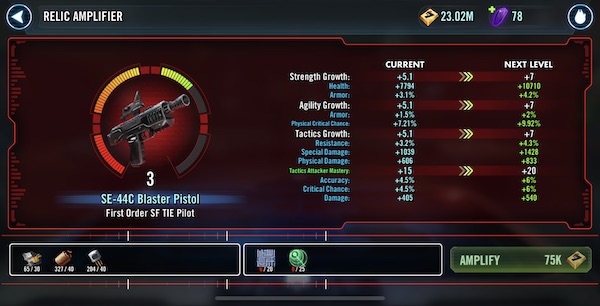 In another addition to the Relic Review series, this article will take a look at First Order Special Forces TIE Pilot and his Relic, the SE-44C Blaster Pistol. As always these reviews compare a character at Relic level 0 to relic level 7 and mods are not factored in.

Starting off, FOSFTP gains a strong Health increase of 19,440. He also receives respectable increases to both Armor and Resistance, 12.86% and 8.73% respectively which are important to add to his survivability.

On the offensive side First Order Special Forces TIE Pilot receives an excellent Physical Damage increase of 2,727 along with a very high Physical Critical Chance increase of 31.5%. Finally, he gains an extra 13.5% Physical Accuracy.

FOSFTP does an average job as a damage dealer. He can round out a First Order team but he is generally not a top pick for the faction. Comparatively speaking, the stat increases from his Relic are about average. Because First Order Special Forces TIE Pilot has a ship, getting him to Gear 13 and upgrading his Relic will improve your First Order fleet under the Finalizer Capital Ship. With these factors, FOSFTP’s Relic is lower end of the Medium Priority tier. However, if you account for FOSFTP being required to fight the Galactic Legend event to unlock Supreme Leader Kylo Ren, he would be low to middle area of the High Priority tier instead.