Dark Dimension III: Dread The Darkness is the ultimate endgame content in Marvel Strike Force, and I begin fighting the third mission after 11 days of attacking the second mission. While I admitted before that this team (below) may not be an ideal team makeup for this game mode, I am going to live blog my daily attempts as I look to defeat the Dark Dimension and earn a 5-Red Star Ultimus. 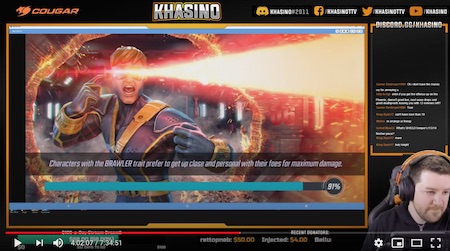 Also be sure to check out the YouTube channel linked in the graphic below (or to the right) from Marvel Strike Force Envoy YouTuber Khasino as he reviews Dread The Darkness Battles on his channel. Note that Khasino’s content is Rated PG-13 (language).

My Dread The Darkness eligible characters:

The battle begins with 42 enemies to defeat and 8 on-screen, with one pre-taunting Drax, a stealthed Spider-Man (Miles) as well as America Chavez, Deadpool, Spider-Man, Psylocke, Ms. Marvel, and SHIELD Security. Two hits and my Gear 14, 6-Red Star Black Panther is dead. Wow. This begins the process of the unravel. I did not have Phoenix stealth the team in her first turn and this proves to be foolish as all 4 are dead around her before she is left to end the battle alone. Sure, she gets her revive/summon in, but all enemies remain in strong, green health when the battle ends.

05.16.20 – According to the enemy health my first battle I took off nearly 3m health on 05.14 which must be a typo or something as I got a Phoenix summon in and a CM ultimate and nothing else. This day of battles will begin with all 42 enemies still alive and 8 ready to come after me, but it comes a day later than it should after I forgot to attack yesterday. I did place another gear piece on Minn-erva to get her to Gear 13 +4 pieces, so maybe another week and I will have her ready.

42 enemies to beat, 8 on the screen and all are at about 60-75% health. With Drax, SHIELD Security and Ms. Marvel I am basically stuck hitting taunters at all times which is quite annoying. This team hits incredibly hard and it is difficult to get to the attackers, and once again I am dead without much progress. According to the enemy health I took off 2m, but I am not sure that anyone other than Phoenix and her summon did anything.

05.17.20 – Well, I did not forget to fight today, so I guess that is good. The game says the enemies have 43m of 48.4m health remaining so despite not having killed a single one, I will take this as a positive.

Of the 8 enemies on the screen, only Drax is in the red with 5 having yellow health and 3 with green health. I am able to take out Drax on this attempt, but these enemies are stupid tough. In the end I watch my characters all die after taking 1-2 hits and according to the game I made 500k progress which feels like nothing.

05.18.20 – Usually I do this live blogs and enjoy what I am writing about. Whether MSF, SWGoH or other games, this is typically fun. I think this specific battle is the first where I feel like I have to “work” – granted I realize how fortunate I am to call this work. That having been said this battle sucks – it’s not even a little enjoyable…

My 486k team heads into battle against 41 enemies and 7 on-screen with Deadpool close to dead and 4 in yellow health. It takes three attacks to kill Deadpool and then the crazy begins. 3 hits kills Ultron twice and Phoenix has made her big change, only today she gets to use her middle ability, unlike yesterday. This leaves America Chavez and SHIELD Security in low red health and a defense down debuff on all but one of the 6 remaining on the screen, so I am going to go against my typical strategy and use the Captain Marvel ultimate just before the battle ends. This kills AC and SS and results in my team being wiped out shortly after without another turn. All in all this feels like a successful run.

05.20.20 – This day began at 40.8m of 48.4m health for the enemy and came after another forgotten day of battles. Of course if I felt like this was more worth my time I would likely not forget… But I digress…

Starting with 38 enemies remaining I have one of the two Spider-Man characters in the red and want to finish him off. After a bad start I restarted and tried another start, and was able to work around the Drax auto-taunt and kill him off before they crushed my characters.

05.21.20 – Now 37 enemies of the 42 total remain and 7 are on-screen. Drax and the auto-taunt is killing me, so I am going to take a few days and only hit him, and as that starts today it is readily apparent how annoying this mission is. My characters all get one-shot or two-shot at best and today’s run is over before it began. I have 39.4m health remaining to remove and the momentum of an injured turtle.

05.25.20 – When you combine a board that is so difficult that it is not even fun to fight and a busy schedule around a holiday weekend, the recipe is a lack of battles. Apparently that is the case here as I failed to attack the DD3 for 3 straight days.

Today’s attack was no different and just as dumb. I started with 37 enemies left and 39.4m health remaining on those enemies and ended with 38.1m health on those same 37 enemies. I was able to get Psylocke and Spider-Man (Miles) down to red health for tomorrow’s battle.

05.26.20 – With the above in place I start with Drax and the pre-taunt again and after a couple of attacks my Phoenix and Dark Phoenix are dead in 3 hits. Let’s be real, that is dumb. Spider-Man (Miles) cannot survive the Phoenix summon, but my efforts to try and make a dent after that fail and I am dead with 36 enemies remaining. Honestly, this is not even worth attempting anymore with this lineup…

My 486k power team enters the battle with 6 enemies on screen and 36 remaining. CM removes the taunt from Drax and BP hits the nearly dead Psylocke, but cannot finish her setting me up for trouble. Phoenix adds stealth to her crew only to take a three hits and be one attack from death, but a little bit of good RNG today gives her a chance to zap the health of the now 10 enemies on screen as Psylocke died when Phoenix summoned her darker self. After Phoenix is killed Punisher finishes off Drax and CM’s basic is enough to kill BP giving me 3 kills today already, one of my best days to date on Mission #3 of Dread The Darkness. Again BP cannot finish as he hits Gamora and she, in turn, kills Ultron twice and my team unravels from there. Three enemies and 3m damage for the day, including the removal of Drax and the pre-taunt, leaves me feeling a bit more optimistic.

05.28.20 – After a great day yesterday (relatively speaking), I am hoping to build on that success. I think I caught a big break on Phoenix not dying too quickly, but we will see how this day goes…

CM starts it off well by eliminating Gamora, and BP lands slow on Spider-Man while Ultimus also gets in a hit, but the enemies quickly kill off BP and Captain Marvel then cause Phoenix to summon Dark Phoenix. However, her zap of health on the enemy is the last of my attacks and I am done for today. 32.8m health remains meaning I knocked about 2m off after yesterday’s 3m tally.

Be the first to comment on "MSF: Dread The Darkness Live Blog – Mission #3"