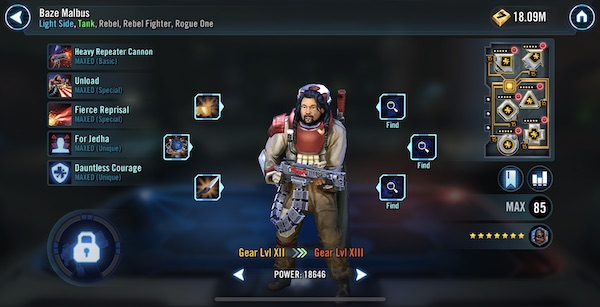 For Baze Malbus, his Staccato Lightning gun is his Relic in SWGoH. His statistics impacted include Health, Armor, Resistance, Physical Critical Chance, and both Physical and Special Damage. His Mastery stat increases impact his Protection and Health Steal.

To start off, Baze Malbus gains a Health increase of 19,746, tied with many others for the 14th highest Health increase from Relics in SWGoH. This brings him to just under 56k Health when maxed out at Relic 7, meaning his Dauntless Courage unique grants him and Chirrut Imwe 11,200 Health prior to adding mods for Baze Malbus. In addition, Baze gains an above average 13.02% Armor increase and a 6.96% Resistance increase which is a more disappointing stat gain. Finally, his Mastery sees Baze gaining 6.75% Health Steal and an extra 9,900 Protection to add to his survivability.

Offensively speaking, Baze Malbus gains a not-surprisingly low Physical Damage increase of 1,535. In addition, he sees a 15.58% Physical Critical Chance increase to round out his meager offensive gains. While Special Damage gains are also included in his Relic increases, since Baze only deals Physical Damage this stat can be ignored.

While the Chaze combo – Chirrut Imwe and Baze Malbus – was part of the META after Rogue One debuted in theaters, this Rebel pair has continued to decline thanks to the game’s power creep and thus been irrelevant for years. With the addition of Mon Mothma to SWGoH and the new Rebel Fighter tag, however, Chirrut and Baze have been given new life. The key is keeping them together – neither is nearly as effective without the other. With all of this factored in, if used alongside Chirrut Imwe and under a Mon Mothma lead I can see Baze Malbus’ Relic peaking in the middle to upper area of the Medium Priority tier.

Be the first to comment on "SWGoH Relic Review: Baze Malbus"