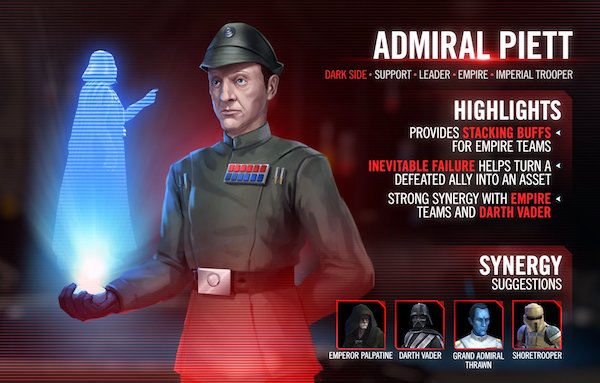 The Empire is getting a boost of power as Admiral Piett is coming to Star Wars Galaxy of Heroes. Admiral Firmus Piett was an Imperial Officer who served under Admiral Ozzel and was promoted by Darth Vader himself. Appearing in both The Empire Strikes Back and Return of the Jedi, Piett’s role in SWGoH will be to boost the Empire and Imperial Trooper factions.

For a full look at Admiral Piett’s SWGoH kit and the development team’s notes, check it out at the EA SWGoH forums. Of course look to Gaming-fans.com for our mod recommendations for Admiral Piett once he is released and tested, and the Relic Review for Piett as well.

SWGoH: Should I Buy the Empire Faction Pack?