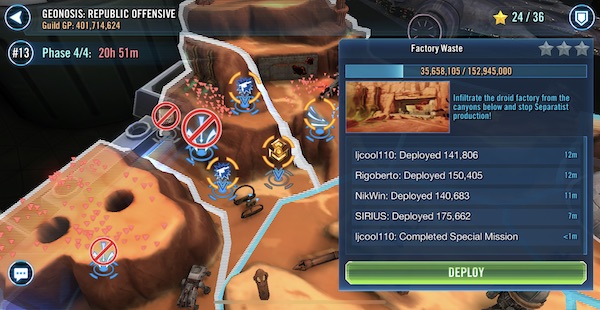 The following is a Walkthrough of my experiences in Phase 4 that will be updated over time. Phase 4 has six Combat Missions and two Special Missions including a Special Mission that requires a 7-star Ki-Adi-Mundi and Shaak Ti, which we review in this article. Below, we take a look at my experience in the Phase 4 KAM & Shaak Ti Special Mission in the middle to hat has a possible reward of 25 Mk II Guild Event Tokens.

The third wave has General Kalani, one of the toughest to work around in the Light Side Geonosis Territory Battle. I work him into red health and then misplay using the AT-TE thinking it will be enough to kill him, it does not, and then my GM Yoda gets killed. I lose Plo Koon on the next enemy attack and my three remaining are able to squeeze by to advance.

The final wave is Wat, General Grievous and a BX-Series Commando Droid. I am able to kill Wat with Armor Shred from KAM and some well-used abilities to heal and remove debuffs, but I lose Barriss. After switching forms with KAM I have the offense needed to get the job done and I am able to win the battle in close fashion.