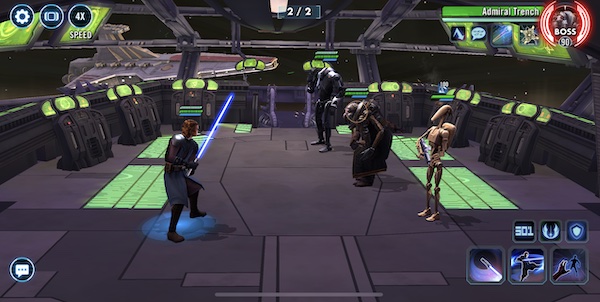 The second release of the third round of Galactic Legend events in SWGoH is here, and unlike the first two rounds, this is the second single Galactic Legend character released after we got Jedi Master Kenobi earlier this year. Now we have the addition of Lord Vader, an Empire and Sith faction member, as we look to show fans how to efficiently add him to their rosters. While I was able to fight the event for Lord Vader within minutes of the game’s update, my schedule did not allow me to fight last night so I begin the battle on Thursday morning, September 9, 2021.

Below is my walkthrough/live blog guide of the journey to unlock Lord Vader. I hope you enjoy and can learn from this. I also have added links to some of my favorite (former) GameChangers and their videos below.

Attempt #1 – In a scene themed straight out of Clone Wars Season 7, General Skywalker and the Bad Batch are joined by Rex (but not Crosshair…) as they fight B1 and B2 enemies that take longer than hoped but are not really a challenge. I focused on the B2s first but I think either way will work fine.

The second battle is against Admiral Trench with a B1 and B2 (see photo). The Stun from Trench is the key so I added Tenacity for my GAS to ward these off, and apparently I did something right as Trench did not get off a single attack on my GAS. From here it is just cleanup as this is a fairly easy one to beat to get your 10 shards of Lord Vader.

Attempt #1 – This battle sees you fight with your General Skywalker and a loaned General Kenobi with the JMK appearance and no mods against Count Dooku and two B2 Super Battle Droids. Dooku is immune to damage in the first tier of this battle, so killing the B2s is the key, and losing Kenobi is not a big deal. In addition, piling debuffs on Dooku is pointless as you fight him in the second battle with a reset on buffs and debuffs (but not ability cooldowns).

The second part of this battle GAS vs. Dooku in front of Palpatine and the graphics are tremendous. The Armor Shred is the key here as Dooku does not hit terribly hard and the win is not one that is hard to come by as 25 shards of Lord Vader are the prize.

Attempt #1 – General Skywalker and four generic Clones, reused from the Jedi Master Kenobi unlock event, face a variety of Jedi in a poor attempt at a recreation of Lord Vader in the Jedi Temple on Coruscant in Episode III: Revenge of the Sith. I spend my 60 tokens and watch the unmodded Clones hit the Jedi with pillows as Lord Vader carries the offensive weight in both of the first two battles. The third battle of this tier is GAS/Lord Vader vs. Shaak Ti, just like in the movie (?), and if you have the Armor Shred ready she is an easy “kill.” 50 shards of Lord Vader are your prize.

After completing this Tier three times and finishing the rest of Tiers I & II you unlock the Sith Lord and then can focus on the best mods for Lord Vader in SWGoH which we are happy to help with!

What Must Be Done – Tier IV

Attempt #1 – Facing Jedi Master Kenobi on Mustafar in the control room, the goal is to get JMK to 75% health and is not terribly difficult if you have Lord Vader with a strong Relic number. I start with Unshackled Emotions, follow it with Dark Harbinger and then use basics to get him to 75% and earn the Ability Material Ultimate.

What Must Be Done – Tier V

Attempt #1 – I spend 70 Dark Side tokens and back Jedi Master Kenobi on the platform outside the control room and I start with Unshackled Emotions which lands Daze and 6 DoTs, but he grants himself Damage Immunity. I use basics until it wears off then use special attacks when available and score another easy win.

What Must Be Done – Tier VI

Attempt #1 – Facing Jedi Master Kenobi one final time I start off with Unshackled Emotions and then use a basic while JMK has Immunity. Once the Healing Immunity wears off I use the Dark Harbinger ability to get some Health back and work toward the Ultimate. Once JMK gets the High Ground, I take two more turns before I use my Ultimate and end the fight.