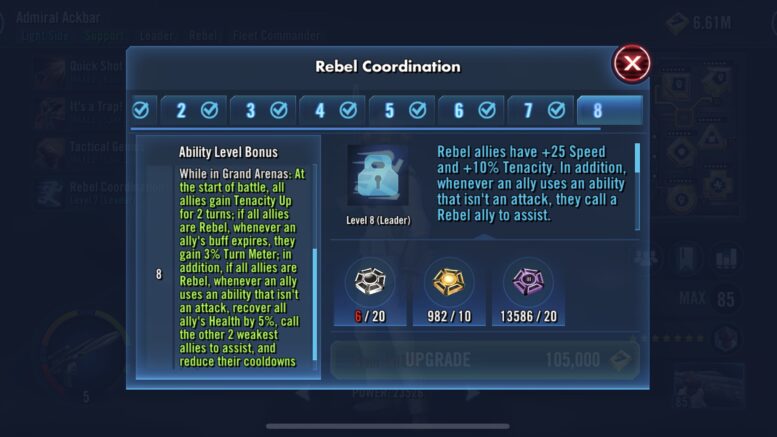 Omicrons today are what Zetas once were-the ultimate resource for a player to use on their favorite or most needed character..Regardless of why, though, the power of a zeta is insignificant compared to the power of the omicron. With the long-awaited rework of Mace Windu, we finally have another avenue of hope to walk upon: that beloved characters left behind in the wake of game development may finally get their moment to shine. Let’s speculate on some characters we may see bestowed with this power and what that may look like.

Count Dooku, otherwise known as Darth Tyrannus, did receive a pretty sweet rework almost three years ago, which has helped immensely. Being a requirement for Lord Vader certainly helped boost his usefulness, but at the end of the day, his most important role is the one he plays in Separatist Might. As one of only 5 heroes for the game mode, he manages to pull his weight rather well, mods and strategy considering. He can also make quite a rag-tag team for Grand Arena, when you look at the Separatist faction, it is quite…separated. Geonosians typically are clumped together, as are the droids; Jango now goes best with either Mandalorians or Bounty Hunters, and Asajj works strictly better with her Nightsister allies. That leaves Dooku, Nute, and Wat – who is typically paired with the Sith Eternal Emperor. A two-man squad (with both of them excelling under stealth) does not math very well, and often are stuck with other random squad members to fill in the gaps.

An Omicron ability upgrade for Dooku would likely work similar to how Wampa’s does for Grand Arena-bonuses to his stats based on how lonely he is, damage increase on counterattacks, protection recovery and more to make him a one-man Galactic Republic unaliving machine. This would likely need to be attached to his unique, giving Nute a chance to be his cowardly self and spread some Extortion/Profit around the board.

I am constantly perplexed by Capital Games’ decision to leave key members out of the Hero list for Republic Offensive. Considering how vital Cody is to the game – a requirement for Jedi master Kenobi and for a special mission in LSTB – it’s a wonder that he hasn’t gotten the recognition he deserves.

Cody would need a light rework by boosting his protection recovery and adding a speed boost to his leadership ability, as well as adding a unique, which presently he does not have (three abilities and a leader is all he’s got right now). His omicron would also be attached to his unique, giving Clone allies a stacking damage boost for each crit until the end of the encounter. Not only would this be a huge boost for Clones in general, but it may also give Cody his time to shine against the Reek special mission that, even with Bad Batch, is still heavily influenced by RNG.

Kit Fisto has been a personal dream project of mine, and by that I mean I’ve resisted taking him above Gear 12 for months now due to his sheer uselessness. His kit looks workable (at first glance), despite being a release character, but sadly compared to everything else, Kit’s kit is ancient and redundant. No built-in recovery on health/protection, an irrelevant leader ability and a weak unique make him a low priority, to say the least.

To make Kit relevant, he too would need a slight rework – a boost in his basic, some form of recovery, and the addition of the Hero tag for Republic Offensive would do him wonders. An Omicron would likely give his fellow Galactic Republic Jedi allies a slight turn meter boost for every basic attack he hits, strengthening the GR Jedi faction and providing a slightly more open window of options for players to utilize.

Do you remember the mad dash for guilds to have a 7-star Lobot? Pepperidge Farm remembers. I had to go into the depths of my roster to find him-and sure enough, he’s sitting at 7 star, level 1. His kit is completely useless, and I don’t think I have ever seen a Lobot in any Player-vs-Player environment, ever.

But perhaps the time for that is changing. Omicrons open up a door we never even imagined to exist, and doubly so with Mace’s rework. Perhaps Lobot is on their list of characters to massively overhaul and bestow the gift of an omicron onto. A rework to make Lobot a Light Side Droid leader, with so many options available to him, would be incredibly enticing to put resources into. Turn him into the droid Mon Mothma, which deals more damage if the target has Defense Down (which Lobot can apply with his basic), and suddenly you have an incredible new squad with Chopper, T3-M4, and K-2S0, not to mention the potential pull from the Beskar Mando squad, the powerhouse Rebel lineup, and even BB-8! There is an enormous amount of potential here, just waiting for the right time.

Darth Maul should have a far greater anti-Jedi synergy kit than he currently has. Even at minimum Sith Eternal Emperor requirements (Relic 4), he deals so little damage it’s appalling to think that this is the man who slayed Qui-Gon Jinn. While his two abilities do deal double damage to Jedi, that faction has grown and evolved so rapidly that this character, who is not only a Sith, but also a pilot in a fleet we suspect will come to relevancy sometime soon, desperately needs attention.

Darth Maul’s omicron would be tied to his leadership, and give the Sith a new squad to operate under. His Dancing Shadows lead ability would be pumped up; Sith would gain stealth at the end of their turns for 1 turn, can’t be ability blocked (excludes Galactic Legends), gain a turn meter boost when they successfully evade, and have their max potency boosted, which would tie into his master’s powers. Characters like the Sith Assassin, Savage, and Darth Sidious (with his Omicron as well) would be staples in this squad.

And there we have it! Omicrons have opened a whole new world for SWGoH players to consider, and with CG now noticeably thinking about revitalizing release characters, the possibilities are endless!

Until next time, Holotable Heroes! And remember – Relic your Mace!!