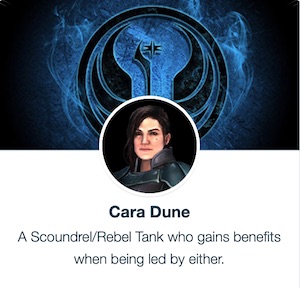 Today’s character to review mods for will be Cara Dune from The Mandalorian series. The former Rebel Shock Trooper turned Scoundrel has synergies with both factions and operates differently for each while maintaining her distaste for the Empire. While the actress who plays Cara Dune, former MMA star Gina Carano, was publicly fired by Disney and Lucasfilm, SWGoH does not fire characters so we should be okay there.

Main Focus: Speed. With a max Speed of 177 which is Top 20 in the game at the time of this writing, Cara Dune will benefit from a strong focus on boosting her Speed stat so that she can maximize her kit and play off her role as a Scoundrel or Rebel, depending on who you used as her leader. Note that after 9+ months of being available in SWGoH it seems she has fit into the Mon Mothma Rebel teams the best. While not relevant as a Territory Wars counter or on defense, I have seen her included on a few Mon Mothma teams in the Grand Arena over the past few months.

Additional Areas to Focus: Survivability in the forms of Health, Protection and Defense as well as Potency, Critical Chance and Critical Damage. Since Cara Dune can revive with Potency Up, and her AoE can reduce Turn Meter from all foes, added Potency is a good route to take. Since she is a tank and Cara Dune’s Relic upgrade stats are based on her role as a tank, adding additional survivability is key to maximizing this character. Health is one stat to keep an eye on when it comes to survivability given her revive is at 50% Health and she does gain some Health Steal from her Relic, but overall her kit does not command a stronger focus on Defense or Protection over Health, so blend this in as your mod inventory will allow. Note that if you’re using her with a Rebel leader like Mon Mothma, she will take on the traditional tank role and taunt when using her basic, so added survivability is a must. Finally, added CC and CD will help her hit harder since she has +100% CC and +50% CD when under Stealth, but this plays more to her use under a Scoundrel leader.

In-game Mod Recommendations: Health. No disagreement here and this works better for most SWGoH players given the fact that Health mods are more readily available. That having been said I can see where a set of Defense mods can fit in for Cara Dune as well if used under a Rebel leader.

The “ideal mod setup” can be interpreted a few different ways, but I am suggesting a blend of Health and Defense mods with high Speed, CC and Potency from the secondary stats. If used under a Rebel leaders, really focus in on survivability stats like Health, Protection and Defense. Here are my recommendations for mods on Cara Dune in SWGoH: