Welcome to the best mods for Darth Vader, the latest article in our series about the popular game Star Wars Galaxy of Heroes where we take a look at the best mods for each SWGoH character. While I do not claim to have all of the answers in this game, I do my research and have used every character I write about extensively. These are mod recommendations based on the character’s kit and actual gameplay to help you in your quest to dominate the Galaxy of Heroes holotables.

Today I’ll be looking at mods for one of the hardest to obtain characters in SWGoH in the early going, Darth Vader. 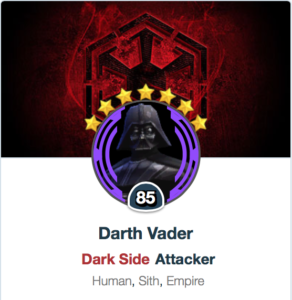 Once a powerful Jedi, Vader fell to the Dark Side and was a major player during the days of the Galactic Empire, playing a key role in the genocide of the Jedi Order. In SWGoH, Vader’s Zeta ability, Inspiring Through Fear, once made him a great leader in some situations, and as the game has evolved so too has Darth Vader as EA Capital Games has done a good job of keeping him relevant in SWGoH. Let’s take a look at the mods you want to use to maximize your Darth Vader.

Main Focus: Darth Vader has gone through a couple of updates over the years in Star Wars Galaxy of Heroes with his No Escape unique and Merciless Massacre special having been added since the game began. While Speed is almost always the first focus for all characters, the No Escape unique grants Vader gains 8 Speed for each Empire or Sith ally and for each Jedi or Rebel enemy. So if used in an all-Empire squad against a team of Rebels you’re looking at a huge Speed boost. Given how well this works with the mechanics of the Merciless Massacre special that was added in June 2020, it is recommended that endgame players have Darth Vader in the 250-260+ Speed range to ensure he goes as soon as possible in almost any game mode.

Additional Areas to Focus: Potency, Offense, Critical Chance, Critical Damage & Health. Potency continues to be a major area of focus given Force Crush can inflict three damage over time effects and Speed down on the opposing team, and his basic can apply Ability Block, so increasing his Potency is a must. This can be incredibly helpful when used alongside Lord Vader or when any Feat requires DoTs. Once your Potency is high enough to reliably land the debuffs, increasing Offense, Critical Chance and Critical Damage will help you smash the enemy with Culling Blade. At Relic 7 Critical Chance comes in at 55.67% CC, so even a Relic 7 Darth Vader can benefit from more Critical Chance, and getting his CD up with the triangle mod is wise whether you use an Offense or a Critical Damage set to help him hit harder. Some endgame guilds require his Physical Damage to hit a certain mark while others may emphasize the CC/CD sets more – that is up to your gameplay and preference. Adding Health can also be beneficial depending on how you use Vader. Since he is still effective under an Emperor Palpatine lead, adding to Vader’s Max Health is wise given the mechanics of Palpatine’s leadership.

In-game Mod Recommendations: Speed & Critical Chance. Honestly this feels a little outdated, but this is par for the course with Capital Games since the end of 2018. Let’s be real, the company tried to simplify mods and added these in-game recommendations, but now when they update characters or add new ones to the factions they do not update their old content. I get it, it can be tough to cover every little detail, so I will do my best to stay on top of things to benefit the community as Star Wars Galaxy of Heroes evolves. For my recommendations see below.

I find using a Potency set with Darth Vader is enough to debuff most of the time, but with the changes to Vader’s kit, a set of four Offense or Critical Damage mods seem to be the best options today. Make sure to get very high Speed secondaries on your mods to find the best mod combination for Darth Vader in SWGoH, which should look something like this:

Yo! These are the only thorough, sane, and non-migraine inducing character mod guides I have found in all of my experience so far. Please keep up the good work and keep churning out these character guides! Love and respect

^ This so much, I love your mod guides, they’re simple but useful asf! Please don’t stop that you have people here that really appreciate them

No problem – we enjoy providing these!

[…] this week to Star Wars Galaxy of Heroes fixed a bug granting Darth Maul too much health, and with the addition of R2-D2 to the game, the meta appears to be shifting. Our […]

[…] or healing can stop it from killing you. However, being Sith, he makes a solid addition to a zVader team, with his massive damage special attack being a great way to quickly kill the small guys in […]

[…] you take the TM reduction route, the major limitation will be Vader’s mods – speed, specifically. Because you’re aiming to control the batter using TM manipulation, […]

Can you provide numbers of where the potency an speed should be for Vader or any of the characters?

[…] in-game description of each ability contains most of the relevant information. Using Darth Vader’s special ability Culling Blade as an example, we can see how this description breaks […]

[…] Darth Vader has been reworked once before when his Zeta leadership ability was added, this new rework will take […]

Great work, and thanks for updating the guide to include the Feb 2018 additions. Very helpful.

Any reason why the recommended mods are not in a table? Having to click on the character link and read the recommendations is clunky (to me).

Well nobody has ever asked that before, so I guess that is one reason. I am not sure why it would be clunky though – it is written in paragraph form then listed with bullets. Your feedback is welcome.

Hey just curious, would a crit dmg set with a crit dmg primary work. and maybe throw in another crit chance or potency set.

Love the site, and the mod advice.
Not sure where to leave comments properly…
Anxiously awaiting updates to some of the toons and some of the newest toons like Bossk.

Any idea if there will be any updates including the newest toons?

Hopefully in the next week – Young Han Solo is almost done but I am traveling a bit this week so it will be a few days. Thanks!

It’s been years and I have yet to come cross a multiplexer crit damage with potency or offense secondaries. Does it exist??