K-2SO has a very interesting toolkit. His counter attack chance tops out at 97.6% (halved while debuffed). His taunt maxes out at 75% (100% while buffed). He has somewhat low armor, and his tenacity isn’t all that great either. He doesn’t deal a lot of damage per hit, and his speed is kind of average (fast for a droid though). He deals two potent debuffs on his attacks: offense down and daze. 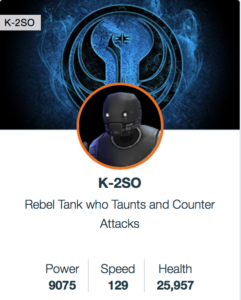 Now we can see that he functions really well as a tank by keeping the enemy’s damage down with offense down, and taking all the hits with his taunt, and dealing just a bit of damage with the counterattack, and dazing anyone on the opposing team who might counterattack or gain turn meter (B2 and Biggs for instance).

However, he has problems with his tanky stats. His health and protection pool are fine, but his defense and tenacity are less than adequate. Normally you would say stack defense, health and protection and be done with it. But K-2SO has a HUGE weakness to debuffs – cutting his counter attack in half and cutting his damage in half (more actually, because he won’t get attacked as much). If the debuff is daze, offense down, or stun we’re talking about 80-95% of his damage being negated. Now it’s true he doesn’t hit hard, but he attacks a lot, and those attacks add up.

So his number one priority when modding is tenacity. Now with Cassian in the group, this becomes less of a problem. You could probably skip stacking tenacity if you run K-2SO with Cassian. You might be able to do so in a group with Yoda, or Rex who give tenacity up as well. The point is, he needs tenacity from somewhere, or he won’t be effective. When modding him 80% is a good number to shoot for.

His second mod priority is his debuffs. The last thing you want is to try and Daze Biggs, and have him resist, get full tm, then do a triple assist with Wedge. So potency is obviously the next priority with him. Under a Jyn or Lobot lead, he does gain some potency, so that is something to consider.

Under an HK lead, critting will let him go twice for every enemy attack. (50% tm on his turn, 50% tm from the counter attack). For this reason, I would say that under an HK lead, 2nd mod priority is shared between crit chance, and potency. So, baring all these things in mind, we have 4 ideal mod setups for K-2SO:

Standard Mod Set-up:
3 tenacity sets. Potency cross, defense triangle, Speed arrow, Protection circle. Secondary priority: Tenacity to at least 80%, potency as high as you can get it, offense and defense are tied for 3rd.

[…] some may need to use Bodhi in battles since he is an easy farm in the Galactic War Store (although K-2SO is a better choice to farm first!). Let’s take a look a at the best mods for Bodhi […]

Getting the Most Value Out of the Google Play Promotion - Gaming-fans.com

[…] of getting together and rewarding Android users, whether it was with a free 7* character, like K-2SO, or in the latest case, free in game rewards for buying gift […]

Why the changes in the format?

We had a guest writer – I think he got the point across though. Do you have questions?