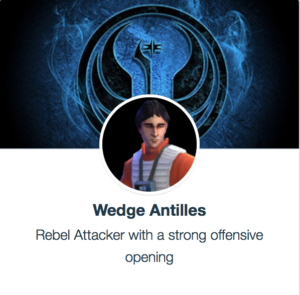 Today’s character to review mods for is Rebel pilot Wedge Antilles. Used correctly (paired with Biggs), Wedge has proven to be one of the most valuable members of your AAT or Heroic AAT team in the early days of that Raid, as well as a mainstay in the Arena for the second half of 2016. However his importance fell off dramatically in SWGoH until he was announced as a required character to unlock Galactic Legend Jedi Master Luke Skywalker. Let’s take a look at the mods needed to maximize Wedge’s kit in Galaxy of Heroes.

Main Focus: While most SWGoH characters need Speed as a major focus, the main focuses for Wedge Antilles are Critical Chance and Critical Damage. Because I suggest focusing more on Speed with Biggs Darklighter, for those who lack mods with high speed secondaries, I would ensure Wedge is fast, but put my better Speed secondary mods on Biggs since Wedge assists his Comrade-in-Arms attack. For Wedge, just make sure his CC is high – he checks in at 64.33% at Relic 3, the Relic level needed in the Jedi Master Luke Skywalker requirements – so boosting this a bit with a maxed CD is recommended.

Additional Areas to Focus: Speed, Health, Potency and Offense would be the other areas to focus. Higher health numbers benefit your Rebels when he is their leader as he grants 15% max health to each Rebel on a critical hit and 25% max health when they defeat an enemy. While Wedge’s leadership value is much lower in today’s SWGoH, Health continues to benefit his use. Potency is very important because you want Wedge to score a Defense Down debuff on your opponents when possible, and Speed is a given for all SWGoH characters. Any additional Offense boost is a plus since we know that offense directly impacts CC and CD stats as well.

Wedge used to be one of the top-used characters in the Arena in 2016 and later thanks to the introduction of other new characters. In order to maximize his effectiveness, getting the right sets of mods is important. I would prefer the mix below to ensure Wedge Antilles has max CD, high potency, high CC and a strong health number. Note a multiplexer/plus mod with offense (over potency as I have recommended) is not necessarily a bad choice, depending on how you use him.

Thank you very much!!!

What mods do you think for Stormtrooper Han? I am thinking Health mods because even though he’s a tank, I feel he is kind of squishy…of course, would love to hear your feedback though!!!

When you have a chance…

Historically (specifically when Rebels were meta), STH wanted as much speed as possible, to taunt early and give your team TM. His base stats are low enough now that he definitely needs health, as well as protection, or he’s going to die, fast. So I would say main focus on health, to counter toons like Sith Assassin who could one shot him, followed by protection, while still taking as much speed as possible.

I clicked teebo and got wedge….can you fix please? Ty

Whatever you can get. Flat rate numbers a usually better, especially when they come from a purple or gold mod since they can upgrade several times over.

Maybe it’s a lack of coffee here, but either I misread a passage, or it’s worded oddly. Re: wedge lead and health. I’m pretty sure you understand it, but the wording can be read as saying that wedges health stat is important with his lead, because it impacts/influences the rebels under his leader perk to gain health and tm on crit. As an experienced player, I get what you mean, but beginning to mid levels may read that as wedges health stat impacts the amount of recovery by the rebels. When in fact, the amount gained is based simply on their own health stat under wedge lead. Keep up the good work!

[…] fast, will maximize damage in the AAT/HAAT more than most anything else you can do. Pair him with Wedge Antilles for the assist on the Comrade-in-Arms attack and you will often a defense down from Wedge if his […]