One of the fun things about Star Wars Galaxy of Heroes is that it is an ever-evolvling game. We have seen the pre-protection Rey Meta, the Wiggs Meta and the Zeta Maul Meta all come and go while also seeing new characters like R2-D2 and Darth Nihilus come in and instantly impact things greatly. As a result of all of this, predicting what is to come is also a fun part of SWGoH. I have made predictions before, like the Death Star Raid (I still have not been proven wrong on that one!), the addition of Thrawn to the game (my timing was a bit off, but I was right in the end) and more, and while I am sure to be wrong here and there it makes the game more enjoyable for this Star Wars and GoH fan. 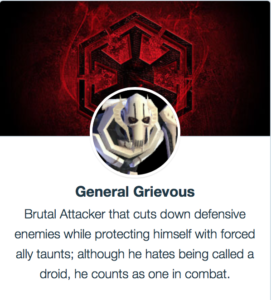 Looking ahead at where I see the game going, I feel confident that we are about to take a look back at the Clone Wars and see a Separatist resurgence in SWGoH. The summer is a time when people are outside more and on vacation – not inside playing on their phones. After EA’s bragging about the crazy amount of time players spend on Galaxy of Heroes (don’t tell my wife that I am part of that crazy!), there’s no doubt that they will need to do something, more than just a new game mode, to get players to spend as much time as possible on the game. Thus, I believe a complete rework of the Separatists including the rework of General Grievous that EA’s Jesse Anderson basically confirmed in my interview with him back in March. I would expect we also see the addition of a new Capital Ship with Nute Gunray in charge, per the data mine info that has long been rumored.

Looking ahead beyond the Summer, September 1, 2017, is scheduled to be Force Friday, the merchandising kickoff for Episode VIII: The Last Jedi. With the new movie coming out in December, there is no doubt that the Resistance and First Order will both be adding new members in SWGoH. Just like with Rogue One, Galaxy of Heroes will surely have releases of characters and events centered around promotions for the movie release, so expect to get a heavy dose of the two main factions of Episode VIII – the Resistance and the First Order.

Known Resistance characters in The Last Jedi include Rose Tico, a Resistance maintenance worker, as well as her sister Paige who is expected to be a Resistance Pilot in training. In addition, Vice Admiral Holdo will also be in the movie, but like many Resistance Officers, may not be appropriate for SWGoH right away.

All in all, I know I am planning for these pieces to fall into place in the coming months. Of course you can theorize as you wish – that is part of the fun of this game. Either way, I plan to be prepared for whatever comes next in Star Wars Galaxy of Heroes.

SWGoH: Nukin’s Mods for the First Order & Stats to Focus On

[…] Resistance were mentioned in the latest update, leaving me hanging on a limb waiting to see if my SWGoH: What’s Ahead article will be a huge success or a major […]

[…] General Hux and Kylo Ren, to be a part of Episode VIII: The Last Jedi. While I fully expect the addition of Hux and other First Order faction members before the end of 2017, today we will look at Captain Phasma’s Zeta Leader […]