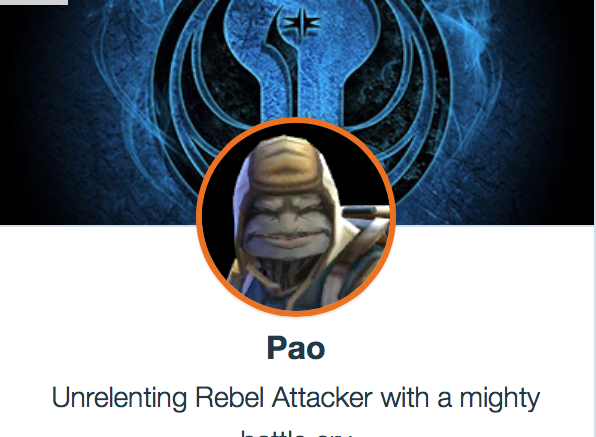 Welcome to the best mods for Pao, the latest article in our series about Star Wars Galaxy of Heroes where we take a look at the best mods for individual characters. While I do not claim to have all of the answers in this game, I do my research and have used every toon I write about extensively. These are mod recommendations based on the character’s kit and actual gameplay to help you in your quest to dominate the Galaxy of Heroes holotables. 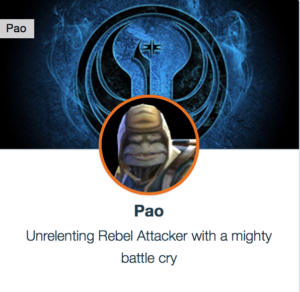 Today’s character to review mods for will be Pao. A Rebel attacker who had a small part in Rogue One, Pao was one of the many who died while making the acquisition of the Death Star plans possible. In SWGoH, Pao has historically been a bottom 10 character, but while Territory Battles on Hoth did not bring value to Pao despite requiring Rogue One characters in specific missions, his value started to show shortly after the launch of the Sith Triumvirate Raid. Pao rose into a significant character to use in the Chex Mix team for the Sith Raid in the early days of that Raid, but Capital Games has done nothing to keep the hard work of their past Raids relevant to the constantly evolving gameplay of SWGoH. Once again, an update to the game years later has at least made Pao relevant as the addition of Mon Mothma and the Rebel Fighter tag has myself, AhnaldT101 and others excited about his potential. Let’s take a look at the best mods to enhance Pao’s kit and stats in Galaxy of Heroes.

Main Focus: Offense was the main focus for Pao in the Chex Mix team. You needed Pao (or Poggle The Lesser works too) to be the 3rd fastest in this lineup with all of the details in the Chex Mix SWGoH Sith Raid article. But again, the game has evolved.

The main focus for Pao now should still be around increasing offensive statistics, but you can take the route of either an Offense set or Critical Damage set, either with strong Speed secondaries. His basic attack can hit the enemy up to three times, so both will help these attacks hit harder.

Additional Areas of Focus: Speed, Critical Chance, Potency, Tenacity & survivability. Speed is not as big of a focus for Pao because of his Turn Meter gains from Sa’kalla and his unique. That does not mean ignore Speed, but those +6 to +9 speed secondaries that are not good enough on other characters can fit Pao nicely. Potency is a good choice since Pao’s Sonic Grenade special attack has a 70% chance to inflict Defense Down on the target. Critical Chance is more important before looking at Pao’s Relic upgrades as his Gear 13 CC sits at just over 54%. Note that at Relic 7 he has 88.5% base CC so little more is needed, if any. Critical Damage and Offense should still get some love, but a 4-mod set for either is a great start. Tenacity will help keep him from getting Shock, Ability Block or Buff Immunity and finally some general survivability in the forms of health, protection and defense will help him stay alive to get more attacks in.

In-game Mod Recommendations: Offense & Tenacity. Offense is indeed important, but the Relic upgrades for Pao suggest he is designed more for crits. Either way I don’t think it matters much as both will help him hit harder. Tenacity is important but I will leave this to the individual player as not everyone has a plethora of great Tenacity mods.

Pao is an Attacker in the Rebel and Rebel Fighter factions, so you need to mod him appropriately with either Offense or CD mods. Here is my preferred mod setup for Pao, however you can mix and match these mod types however you like as long as the high offense secondaries are in place:

You could add a HAAT raid variant.
I read that PAO is a great addition to a Kenobi / Maul team in P1.
One need to have only enough speed to throw the Team offense up.
Otherwise it is all about attack (and health/prot.)
In this configuration, don’t bother with Potency or Defense.

My GameChangers account is set to be ready later this week and I will look to test that lineup out ASAP and revise if needed. DO you have any interest in writing mod guides for us from time to time?

Is an update for the new allegedly viable ‘ChexMix’ Sith Raid team possible in the somewhat near future? My guild, as well as numerous chats almost everywhere, are mandating him as one of the MUST focus on toons. Thanks!

Yes, working on that now – here is a link to the mechanics of the raid and the Nukin video on it. https://gaming-fans.com/2018/04/swgoh-a-closer-look-at-the-chex-mix-team-for-phase-3-of-the-sith-triumvirate-raid/

Much obliged! For both the new mod setup and the text description ACCOMPANYING the video. Love that! Thanks again!

Any other teams that you would like to see us do this for?