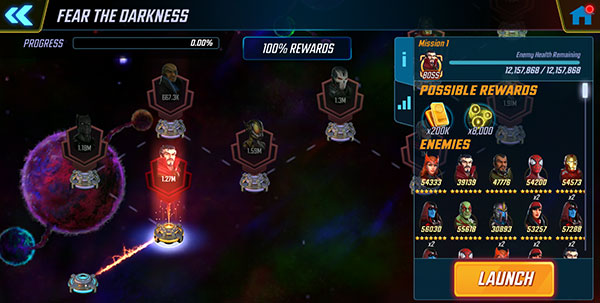 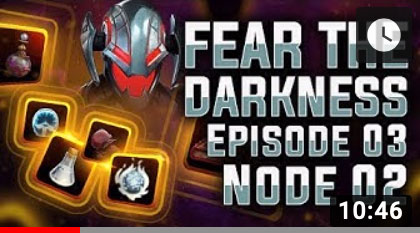 Also be sure to check out the video linked in the graphic below from Marvel Strike Force Envoy YouTuber Khasino as he reviews Fear The Darkness Battle 2 as well. Note that Khasino’s content is Rated PG-13 (language).

06.19.19 – While I am hoping this battle will start off better than the last, I think this will continue to be a trend. Black Panther is the character listed as the lead of the 22 enemies, but I do not see other Wakandans on the team, so at least there is that. This is proving to be very tough with the two SHIELD Security (SS), but I am focusing all attacks (that I can) on Black Panther to try and take him out first. Fortunately I am successful and BP is down as I now look to focus on Gamora to eliminate her offense. The SS on the left will not stop taunting, so I chip away and kill him only to see Captain America and another Black Panther join the fun. Thanos is my first to die, but Minn-erva is awesome and brings him back. A few hits later I am in trouble after a BP AoE attack and my Minn-erva is dead. While my time is limited, my BP takes out the other SS and their BP before a HAND Sentry and Merc Lieutenant join the battle. I take out Spider-Man just before the HS puts stealth on everyone. My Day 2 battle will begin with Ant-Man and Vision in red health, Captain America with yellow and the ML and HS in green with 16 of 22 enemies remaining.

06.20.19 – While I am getting closer with my other Gear 12 characters, I am not having any luck. Nick Fury is one Serum So2 away from the upgrade…

Battle time. 16 of 22 enemies remaining, 5 enemies on the screen with 2 in the red (Vision and Ant-Man). I will try to knock them off soon, but I want to focus on HAND Sentry given he is the toughest one to deal with currently. I have HS in yellow and took out Ant-Man in the process, but Captain America taunts again. He is yellow health, but I dispel the taunt with Captain Marvel. Now Vision is out of the way leaving HAND Sentry, Captain America and the Merc Lieutenant. I take out HS and two attacks later reinforcements arrive – Vision, Ant-Man, Cap, Black Panther and Spidey. While their attacks are adding up, ME is down to red health before I kill off the Merc Lieutenant, but the health gained from the kill is not enough. ME is down with 11 enemies remaining and I will slowly die off as a result. I will end this battle having knocked off just 5 enemies and having 5 on the board – Vision, Cap and BP in green health, Spidey in yellow and Ant-Man in red.

06.21.19 – 11 of 22 enemies remain with the on-screen bad guys being Vision, Cap and BP in green health, Spidey in yellow and Ant-Man in red. I decide to focus on Ant-Man first and as soon as I kill him off and Deadpool and another Spider-Man show up. I kill off the original Spidey with one of Black Panther’s special AoE attacks and then focus on their BP. Finishing him off leaves me with a team at all nearly full health and 8 enemies remaining, 4 on-screen. Another attack on Spider-Man and a new Ant-Man and Black Panther join the fun, so I stun Ant-Man and will try to remove him ASAP given his annoyance with slowing everyone down. I am starting to take some damage as they have 6 on the screen and Spider-Man and Cap in red. Captain Marvel finishes off Spidey and several hits later I take out Captain America to reveal the final two enemies. Here is the update.

6 of 22 enemies remaining, all on-screen. Mercenary Lieutenant and Vision, the newest additions, are full health. Deadpool is about 75% health, Ant-Man about 60%, with Black Panther yellow about 50% and the original Vision yellow at about 35% health. I get BP down but my Minn-erva is in the red, leaving the end of the battle anyone’s guess. Thanos goes down and then so does ME, leaving me 3 v 5 and the win will have to come tomorrow. Let’s see if I can weaken them a lot first… I finally fall with Ant-Man a hit or two away from death as I am ready for tomorrow’s fight…

06.22.19 – With just 5 enemies remaining this should be the final time I need to hit battle #2. 5 vs 5 to start and I stun Deadpool right off and then kill Ant-Man. Deadpool takes a few hits then BP finishes him off leaving me with a 5 vs 3 – 2 Visions and a ML. Because Vision is such a pain, I want to take out the ML first despite being in green health. At this point it is me teeing off on the enemies until I finally kill ML and one Vision. Now I will use basics and try to heal a bit to head into Battle #3 as strong as possible.

Day 1, Battle 1 (1 total): Captain Marvel, Star-Lord, Thanos, Minn-Erva and Jessica Jones (260k) – Using the same team that just finished off Mission #1, I continued the Star-Lord/Thanos ability energy spam strategy (place then side-by-side and use Star-Lord’s middle ability to apply blind and give out energy to his teammates, then on kill, Thanos gives out energy as well). At the 10 of 22 enemies remaining mark I landed a well-timed heal from Minn-erva which was key. One note strategically, since you face multiple SHIELD Security and Captain America enemies, I hit them whenever they did NOT have Defense Up in an effort to weaken them more efficiently for when they taunt and I have to attack them. This proved to be quite helpful in the long-term for this battle. I used ME’s revive to heal twice in this battle when she was clearly in trouble, and while it was the right move at the time, this burnt me with 4 of 22 enemies remaining as they took out Thanos, then Minn-erva and I was unable to get a full clear in one battle.