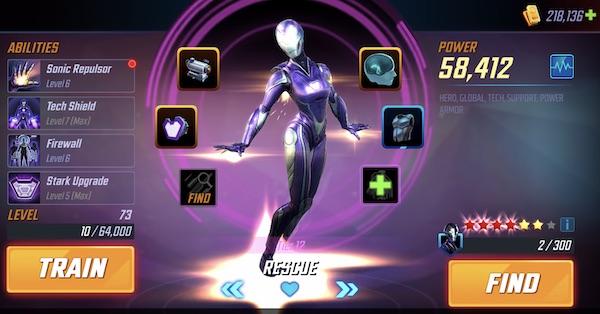 Welcome to the Iso-8 guide for Rescue, the latest in our series about the popular game Marvel Strike Force. In this series we look at the best Iso-8 enhancements for MSF characters. While some may refer to Iso-8 as simply “mods” like in other mobile games, we will look to stay true to the naming convention of the Marvel universe and the developers over at Scopely. We at Gaming-fans.com certainly do not claim to have all of the answers in this game, but we do our research and look to use every hero and villain we write about extensively. These are Iso-8 recommendations based on the character’s kit and actual gameplay to help you in your quest to dominate in Marvel Strike Force. Note that these Iso-8 classes may differ from one team makeup to another, so feel free use this as guide knowing that these can change in differing situations within MSF’s gameplay.

Today’s character to review is Rescue. A character who is not seen in the Marvel Cinematic Universe (MCU) until Avengers: Endgame, Rescue was a strong addition to the Power Armor faction when added to Marvel Strike Force and also holds the Hero, Global, Tech and Support tags. Let’s take a look at the stats we want to focus on enhancing when Iso-8 modifications are added to the game.

Main Focus: Health. Rescue is the classic character who makes a decent faction much better thanks to an awesome kit. Specifically, Rescue’s survivability enhancements are the difference in the Power Armor team being okay to being a high-end team, especially in Alliance Wars. Iso-8 mods for Rescue should focus on upping her Health stat as much as possible as her Tech Shield and Stark Upgrade abilities both provide Barrier based on her Max Health.

Additional Areas to Focus: Potency, Tenacity and Defense. While much depends on the stats you can improve through Iso-8 modifications, it seems likely that these three will indeed be enhanceable stats. Added Potency will help Rescue land the Slow debuff when she is using her basic, although let’s be real, Rescue is not a character you want attacking. Tenacity, or the enhancement of her ability to resist debuffs/negative status effects, will only help ensure she does not get Ability Block or other crippling red icons above her head. Finally added survivability in non-Health stats is wise to keep her alive longer, but Health should always be the #1 focus above everything else.

When you look at the Class options available through Iso-8, it is clear that Rescue fits into one of two of them – Healer or Fortifier. While Fortifier has some nice stat gains in adding Barrier to the character which is impacted in part by their Max Health, the two levels that increase the Max Health by 10% that appear in both the Healer or Fortifier Class stats are the keys. While the Healer class seems to have slightly more healing impact on teammates, it is up to the individual to determine which is a better fit for thier roster make-up, I don’t think you can really go wrong with either.

Be the first to comment on "MSF: Best Iso-8 for Rescue"