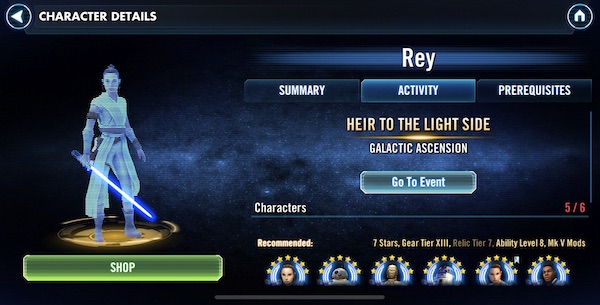 The Galactic Legend events in SWGoH have been building up for months, and finally on March 25, 2020 players were allowed to start working toward opening the new Galactic Legend versions of Rey and Supreme Leader Kylo Ren. Less than one week after the launch of this new content by Capital Games, new content that only applies to less than 1% of the player base after nearly a year of hardly anything different in the game, I began my journey to unlock Galactic Legend Rey on March 31, 2020 and have updated the content below through April 20th, when I finally faced Tier VI. Below I have been live blogging my experience with the Galactic Legend event as my Resistance characters have helped me achieve my goal, and while I have avoided many videos and opinions of others on the Galactic Legend events as a whole, I have given my unfiltered opinion throughout in regards to the battles, how the GL process is setup, and most importantly the graphics. 😉

Below is my walkthrough/live blog of the journey to unlock Galactic Legend Rey. I hope you enjoy and can learn from this. I also have added links to some of my favorite (former) GameChangers and their videos below. 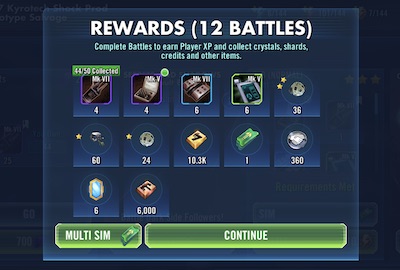 03.31.20 @ 10 am ET – I start with 20 Light Side Currency and need 15 to launch the first battle. This Light Side Currency can be gained by beating any Light Side battle, 1 pieces at a time. Of course when you fight or sim a Light Side board, it’s all up to RNG on how many pieces you get as shown in my graphic to the right. In my first three sims over 36 battles I received 14 pieces of Light Side Currency for a successful drop rate of 38.8%. Overall I am hearing reports of 25-30%.

Heir to the Light Side – Tier I

Tier I can be fought 8 times with rewards of 10 shards of Rey each time, thus 80 shards can be obtained from this first Tier.

Attempt #1 – You start off facing Lieutenant Cowell and four First Order Snowtroopers on Kijimi. My first tip is this, do not use a standard old Resistance team of Rey (Jedi Training), BB-8, Resistance Trooper, Finn and Rey (Scavenger) as this did not work for me at all as I wasted 15 valuable pieces of this currency.

After falling flat on my face for the first battle, I watched CubsFanHan’s live stream from last week (link at bottom of page) and have decided to learn from my mistakes and some of his (much) smaller ones in the first battle. 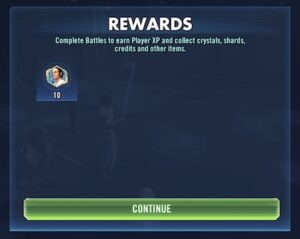 I am using the RH Finn and RH Poe more today than likely ever before, as I am certain this pair will be a fun and often-used duo in the future. I am working to keep the boss, Lieutenant Cowell, under control with RJT’s turn meter reduction while I try to kill off the First Order Snowtroopers. I am staying away from any AoE attacks but still lose RH Poe early, about the same time as I take out the first FO Snowtrooper. This strategy works fairly well as I look to spread C-3PO’s Confuse when I can, usually putting it on Cowell. In the end I am able to win the battle with four characters alive to receive the reward of 10 shard of Rey. More to come as I will add Tier II tomorrow.

Early Thoughts – Tier I: So far this is no more than a relatively difficult marquee event. It’s cool to see new characters with Lieutenant Cowell and the First Order Snowtroopers, but outside of that Tier I is nothing to get excited about.

04.07.20 – Returning to this Tier after completing each of the first three, I found this first Tier to be the most difficult, at least with the lineup I used. As a result I am trying different teams here to see if I like the results any better. Note that I am using my best mods on these characters each time. Here is what I have tried thus far:

My takeaway is that the Veteran Smuggler Chewbacca option is the best, especially when you get comfortable with his to play it. Controlling Lieutenant Cowell with RJT, BB-8 and C-3PO’s abilities to reduce Turn Meter and using the burst attacks from C-3PO are important, but the stuns you can land with VS Chewie and R2 are the biggest factors in why the 3-stars happened so often, 4 of my 5 attempts.

Heir to the Light Side – Tier II

Tier II can be fought 4 times with rewards of 25 shards of Rey each time, thus 100 shards can be obtained from this second Tier which will get the player to a max of 180 shards after completing the max attempts on Tiers I and II.

Attempt #1 – 04.01.20 – I got a bit of a late start on Tier II but here we go. Facing General Hux, a First Order Executioner, a FOTP and two FOSTs, I look to confuse or stun Hux right away and this goes nowhere. My Resistance Hero Poe is dead early, again, but I am able to bounce back as C-3PO and the RJT/BB-8 combo take Hux out. Now focusing on FOE, my staying away from AoE attacks and BB-8 countering is really helping out. I kill off FOE after BB-8 take a few hits, and now I just have the FOTP and two FOSTs remaining. RH Finn and RJT finish off the FOTP and now I have a 4 v 2 with two confused FO Stormtroopers to kill to get the win. With a little bit of strategy and awareness of the mechanics of the enemies this was not a difficult battle at all as I receive 25 shards of Rey.

Early Thoughts – Tier II: More of the same. So far this is nothing more than a strategy-based marquee event.

Heir to the Light Side – Tier III

My apology for the delay as I had to homeschool my kids the past two days and it threw off my schedule a bit. The good news is I now have 136 Light Side Tickets to use and will play this Tier of the event for the first time. I will say that while I have watched videos from Skelturix and AhnaldT101, I am looking to remain objective in my assessment of the Galactic Legend event and all aspects of it.

Ok, so my “strategy” was to mix Feint and Strike and change up the variations of both and, while it took a good 3-4 minutes, it won me 50 shards of Rey on my first try. However, I basically guessed the entire time and left it to luck which, in my opinion, is absolutely absurd for something as hyped and expensive as this event. My second time battling Tier III was very similar to the first battle, only this time I took a 2-0 lead, saw Kylo tie is up before I won 4-2.

So what should you do? I would recommend the mix of Feint and Strike always being ready for you opponent to Misplay (the Confuse ??? icon, only in blue) and then use Strike when they have misplayed every time.

Heir to the Light Side – Tier IV

04.14.20 – After unlocking Rey and watching videos on what Tiers IV and V include, and worst of all reward, I have not cared much about getting to Tier IV quickly. But my Light Side Currency has maxed out and as a result there is not need in wasting it.

Tier IV costs a whopping 70 Light Side Currency and features your team of five characters, with the new Rey as the leader and four characters from your roster, fighting Supreme Leader Kylo Ren and two Elite First Order Raiders, all at Level 90. I watch a video using Rey, C-3PO, BB-8 and the Resistance Heroes, but chose to use R2-D2 in place of BB-8 on my team because of the stuns from R2’s basic. This proved to be very effective as the battle was a breeze as my R2 stunned SLK and his buddies over and over again.

The prize for defeating Tier IV is not even a Portrait – it is one of those Quest rewards/titles that is so insignificant in this game that I do not even know what to call it… What a joke.

Heir to the Light Side – Tier V

04.14.20 – After the disappointment that was Tier IV’s reward, Tier V’s Portrait reward looks like something of value. Ugh.

The battle is…the same dang battle as Tier IV. Seriously? Another 70 Light Side Currency and we cannot even get a new background scene or even new dialogue. What a joke this game is becoming!

While this battle is a bit more challenging, maybe thanks to my attitude being soiled by Capital Games and their pitiful event more with each Tier, I was still able to beat it without trouble and at 3-stars. Now I can proudly display my Rey Portrait which is nothing more than another waste of time and currency in this game.

Heir to the Light Side – Tier VI

04.20.20 – After nearly a week of saving up my Light Side Currency I am finally ready to fight Tier VI. I start the battle with AhnaldT101’s suggested team of Rey, the Resistance Heroes Poe & Finn, BB-8 and Rey (Jedi Training). 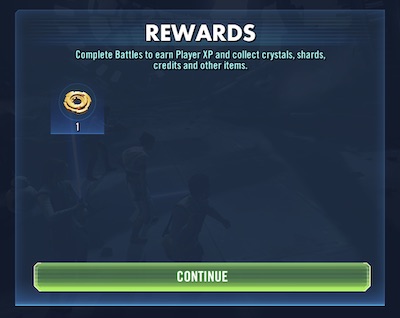 Once again we get a repeat of Tiers IV and V – very disappointing and downright lazy if you ask me. How Capital Games can hype this up for months and repeat the same battle in 3 tiers shows an enormous level of disrespect for the community and our investments…

The strategy that followed Ahnald’s team makeup in the link above was to place The Force it With You on RJT since it forces a taunt and keeps that ally from being defeated, then beef up RJT with Rey’s Lifeblood special. I then focus all attacks on Supreme Leader Kylo Ren until Rey’s Sudden Whirlwind is available, then use it to take out the First Order Raider minions. By the time I get to just SLK remaining all of my characters have so much bonus protection that there’s little chance of losing, so the key is just being patient and attacking away at SLK who take a while to defeat.

Be the first to comment on "SWGoH: Galactic Legend Rey Event Live Blog/Walkthrough"