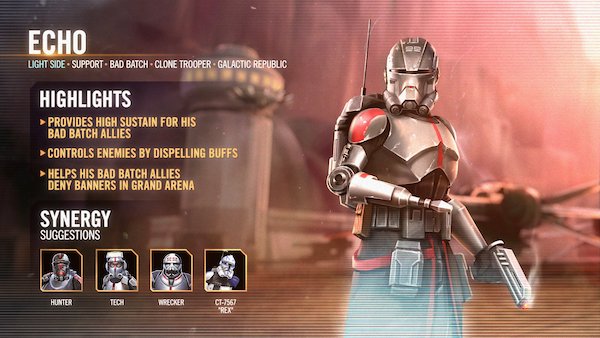 Welcome to the best mods for Echo, the latest article in our series about Star Wars Galaxy of Heroes where we take a look at the best mods for individual SWGoH characters. While I do not claim to have all of the answers in this game, I do my research and have used every character I write about extensively. These are mod recommendations based on the character’s kit and actual gameplay to help you in your quest to dominate the Galaxy of Heroes holotables. 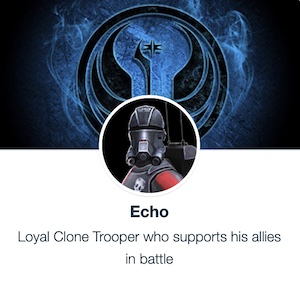 A member of “The Bad Batch,” a clone commando special forces squad that was active during and after the Clone Wars, Echo was introduced in SWGoH in May 2021 as the 4th and final member of the Bad Batch faction, joining Hunter, Tech and Wrecker. Echo is a Light Side support character who is a Clone Trooper and belongs to the Galactic Republic and Bad Batch factions. Let’s take a look at Wrecker and the best mods to fit his kit in SWGoH.

Main Focus: Speed. Echo is tied with Moff Gideon for the fastest non-Galactic Legend characters in SWGoH, so placing a Speed set on him is a must. These characters are newer to the game and designed this way for a reason, and I suspect they will fit into another Galactic Legend counter and/or high-end GAC team in the near future. Because of this key stat, not having a Speed set on Echo or Moff Gideon would be foolish.

Additional Areas to Focus: Potency and survivability in the forms of Health, Protection and Tenacity. First off, all Bad Batch allies gain +50% Potency from Hunter’s leadership, so this character should already start off strong which will help him land Buff Immunity, Expose, Daze and Healing Immunity from his special attacks. Hunter’s leadership also grants Bad Batch allies +35% Max Health and +35% Max Protection, so raising both is wise, and if he has a single stack of Translation from Tech that adds another 30% Max Health. Additional Defense is not a bad idea either for Echo, but Tenacity is a must given how much his abilities will disrupt your foes. Having Echo with high Tenacity will allow him to set up his Bad Batch allies to really “wreck” the competition.

Speed Priority: 9/10 – For now I am going with an 9 for the Speed Priority until we know more about the Bad Batch characters, but I am guessing that this will be a 10/10 once GL counters and more are tested.

In-game Mod Recommendations: Speed & Potency. While I continue to say that it is best to follow the in-game mod recommendations for new characters in SWGoH (but beware the in-game recommendations on some of the old ones!), I am leaning toward Tenacity over Potency for Echo, as long as you focus on both stats. Speed is the key, but Potency and Tenacity are both incredibly important, so focus on these three and you will be doping well.

Echo is the fourth member of the Bad Batch faction and appears to fit into that team quite nicely with his disruptive kit. While CG recommends a Speed and Potency set, I can see a Tenacity set instead of Potency, as long as you have high Potency from the secondary stats. Either way, here is my preferred mod setup for Wrecker: