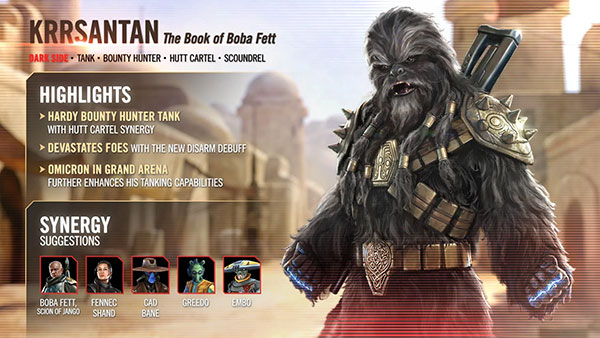 Welcome to the best mods for Krrsantan, the latest article in our series about the popular game Star Wars Galaxy of Heroes where we take a look at the best mods for SWGoH characters. While I do not claim to have all of the answers in this game, I do my research and have used every character I write about extensively. These are mod recommendations based on the character’s kit and actual gameplay to help you in your quest to dominate the Galaxy of Heroes holotables. 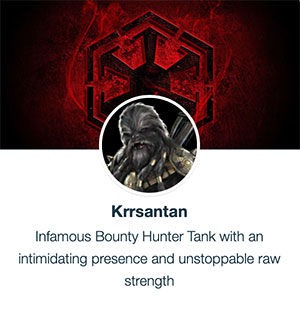 Today’s character to review mods for will be Krrsantan, aka Big K, the newest Bounty Hunter character in the game and the introductory new character for the Hutt Cartel faction. Krrsantan was added to Galaxy of Heroes in July 2022 and is joined by Boba Fett, Cad Bane, Embo, Greedo, Mob Enforcer and Gamorrean Guard in the new Hutt Cartel to be lead by none other than Galactic Legend Jabba the Hutt himself. Let’s take a look at the best mods for Krrsantan to make him more effective on your roster, knowing full well this will evolve with the addition of new Hutt Cartel characters.

Main Focus: Krrsantan is a taunting Tank with the ability to apply a variety of debuffs to limit enemy teams, but his primary job is to take enemy hits and stay alive to allow those around him to do damage. As a result survivability should be your main focus with the 3-way recommendation of Defense, Health and Protection. He gains Defense Up when he taunts with his Ferocious Fusillade special and recovers Health and Protection, and he has the ability to increase his Max Health by up to 100% from his Dismember special. In addition, the Omicron upgrade for Krrsantan grants him +40% Max Protection in Grand Arena battles to build on this stat.

Additional Areas to Focus: Speed, Potency & Tenacity. Speed is a necessary evil in SWGoH, but Krrsantan is not a character who requires a high Speed stat to be effective. You want him to Taunt when possible, so getting to that turn or to his Payout is the key. Increasing Krrsantan’s Potency will help him land Potency Down, Evasion Down and Shock with his basic more consistently. Tenacity is never a bad idea with any tank character as keeping Defense Down and other debuffs away helps them soak up the damage longer, and this will build on his +30% Tenacity from his Payout being activated.

In-game Mod Recommendations: Defense and Health. As I have said now many times before, new characters created by EA Capital Games tend to be spot-on with the mod recommendations for new characters and Krrsantan appears to fall in line with this. Krrsantan is a character you want to have high survivability all-around and this matches my SWGoH mods evaluation as well.

The “ideal mod setup” can be interpreted a few different ways. If you target survivability with Health, Protection, Defense and Tenacity and add Potency through the mods you should be able to maximize his kit. Here are my recommendations for the best mods for Krrsantan in SWGoH: