Welcome to the latest article in our series about the popular game Star Wars Galaxy of Heroes where we take a look at the best mods for each SWGoH character. While I do not claim to have all of the answers in this game, I do my research and have used every hero I write about extensively. These are mod recommendations based on the character’s kit and actual gameplay to help you in your quest to dominate the Galaxy of Heroes holotables. 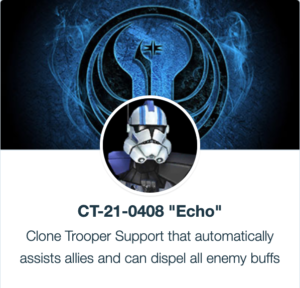 Today’s toon to review mods for will be Echo (CT-21-0408), who was, at least at one time, one of the hardest characters to farm in Star Wars Galaxy of Heroes. Alongside Cody, Fives, and the Clone Sergeant, Echo once proved to part of a dominant team in the early days of the Heroic AAT for Phase 2 or Phase 4. Of course the game had evolved tremendously since then and Echo and his look-alike brothers have once again gained value in the game thanks to the August 2019 Clone rework as we prepare for a Light Side version of the Geonosis Territory Battles in SWGoH.

Main Focus: HAAT dominance was the old reason for a strong Echo, then he and his Clone buddies, minus Rex, became rather irrelevant. All of that changed in August 2019 with the rework of three Clone Troopers and the addition of the 501st tag to Ahosoka Tano, Rex, Echo and Fives. Now, with Echo’s kit upgraded the focus on Echo needs to be on making him hit harder, thus Critical Chance and Critical Damage. Echo is designed to assist every Clone Trooper or 501st ally basic attack, and that will be a critical hit if the preceding Clone/501st attack was also a crit per his Copy That unique. So use your mods to up his CC and CD and seek out high Offense in the secondaries stats.

Additional Areas to Focus: Speed, Potency, Offense and survivability in the form of Defense. Echo, like the Clone Sergeant – Phase I and Fives, does not need super-high speed thanks to his assists mentioned above. However I would not shy away from mods with solid Speed secondaries, just save the +10 or higher mods for characters who rely on Speed more. Potency will help Echo’s EMP Grenade special stun Droid enemies more effectively and additional Offense will work well with the CC and CD focus mentioned above and the Domino Squad unique details below. Finally, from a survivability standpoint your best route is to get high Defense in the secondary stats from your mods. Echo’s Domino Squad unique reads “if Fives is present, Echo deals +100% more damage when Fives is Taunting, or has +100% Defense when Fives is not Taunting.”

In-game Mod Recommendations: Offense and Critical Chance. I certainly do not disagree and purposely did not look at the in-game recommendations until after I wrote this to see if we were on the same page. If you prefer the Offense set (4 mods) and CC (2 mods) I think this will prove effective just as will a CD set (4) and CC (2) with strong Offensive secondary stats.

The rework of three Clone Troopers and the addition of the 501st tag in August 2019 has made the proper modding of each of these characters more important than ever to ensure you maximize their effectiveness. As a result, my preferred mod setup for Echo is:

Hey Google “how to mod echo” and see what comes up. The header had “online prescriptions” in it. I’d send you a pic but it wont let me. You have some complaints for Google if I were you.

Yeah, we have the site scanned daily so I will look into it and see what I can do. Thanks for the info!