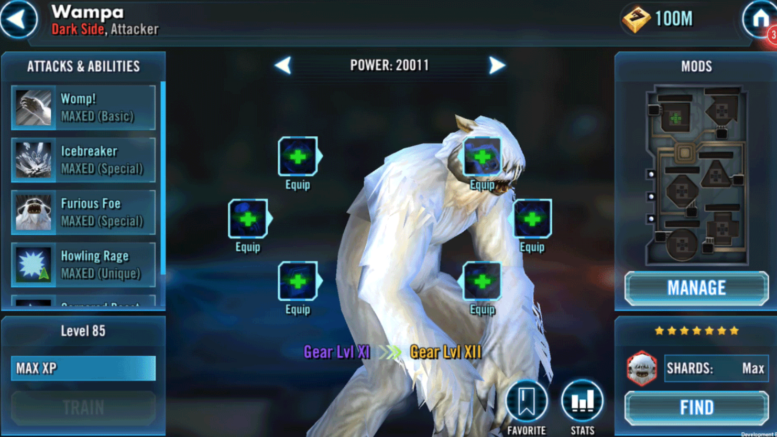 Welcome to another article in our series about Star Wars Galaxy of Heroes where we take a look at the best mods for individual characters. As your guest writer today I am happy to be covering a character I have invested greatly into – a character I have tested out many times over. These are mod recommendations based on the character’s kit and actual gameplay to help you in your quest to dominate the Galaxy of Heroes holotables. 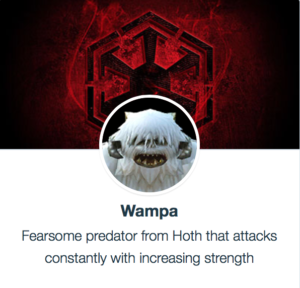 Today’s character review is for one of the Guild Events Store characters in the game, the Hoth monster, Wampa. He’s slow to get going, but after a few turns, he can become a force to be reckoned with. Having only a Dark Side faction tag, Wampa needs to rely on his own abilities to build himself up.

Main Focus: Speed is key with Wampa to get his damage and Turn Meter boosted. His natural offense is high, especially against Rebels where his basic does double damage. However his base Critical Chance is rather low. Early in battle he won’t be as effective until he can do his Furious Foe, which starts on a 4-turn cooldown. Also, with Wampa’s IceBreaker, he gains an additional 150% Protection. So, the more Protection we can pack on before the start of battle, the more survivable he’ll become.

Additional Areas to Focus: Tenacity, Potency, Offense and Critical Chance. Wampa can be mitigated easily with Stun and Daze so Tenacity would be nice to see. If you want to use your Wampa as a debuffer, Potency will be an important stat to stack up on. If you’re running the old Zeta Darth Vader lead, one of Wampa’s few and early synergies, he can help out zVader with his Damage Over Time debuff on basic. Along the same lines, if you have a Zeta on Wampa’s Cornered Beast, Vader and other DoT’ers will boost Wampa’s damage with each DoT on an enemy. Due to Wampa’s low starting Crit Chance which only scales to 33.33% at Gear 13, consider adding CC via mods. However, after 4 turns, once Wampa does Furious Foe, he will gain 40% Critical Chance. While we have an understanding of Potency and Tenacity in SWGoH, you have to determine if high Tenacity is worth losing the benefits of others stats like Offense, CC or CD.

In-game Mod Recommendations: Offense & Critical Chance. Offense I agree with, but the recommendation of CC is not one I am totally on board with, especially after the Jedi Knight Luke Skywalker event where Potency and Tenacity are quite important to maximize his abilities I would check your roster’s mod inventory and then prioritize accordingly with CC, Health, Potency or Tenacity mods all in play for the second set.

Because Wampa can hit so hard, boosting his Offense is key. While some could look to a 4-mod set of Critical Damage mods, his low base CC pushes me toward Offense. In addition, his application of debuffs and need to not have debuffs on himself are important to maximizing his kit. Let’s take a look at my preferred approach for Wampa’s mods:

Original article by Hagar of Descendants of the Empire
Revised June 2020 by LJ, Director of Content

Wouldn’t a full set of tenacity mods (6 for +30%) with a tenacity cross along with protection circle and triangle with speed arrow be useful to making wampa go in arena? When maxed, Wampa naturally has 39% tenacity and this would raise it to 94% tenacity. After using his Icebreaker special this would bring it up another 50% to 144%. Wampa’s speed comes with not being buffed and enemy being buffed. Also, people in arena will be targeting Wampa as much as they can. I know I would. If he can’t be debuffed, then wouldn’t that be better than just bringing up his offensive set which is strong to begin with? I would think in PVE it would make sense to boost offense more so, but I think with PVP that tencacity would be the way to go. I’ll find out when I unlock in him in about a week

Did the tenacity build work any better on defence?

I just added a paragraph to the article which I think will help out with this a bit.