Fear The Darkness is the ultimate endgame content in Marvel Strike Force, and I began fighting node #1 about a week ago with each board taking 2-3 days to complete for the most part. While I admitted before that this team (below) may not be an ideal team makeup for this game mode, I am going to live blog my daily attempts as I look to defeat the Dark Dimension and open Ultron. 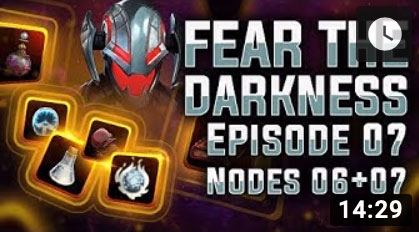 Also be sure to check out the video linked in the graphic below from Marvel Strike Force Envoy YouTuber Khasino as he reviews Fear The Darkness Battles 6 and 7 in the video linked. Note that Khasino’s content is Rated PG-13 (language).

06.26.19 – Life has been crazy busy of late and I missed my first opportunity to attack Battle #6 yesterday, so here we go (finally). Nobu is the “boss” on this 1 million power battle, the second weakest of the first 6 battles on power alone. 18 enemies are the total to beat with 8 on-screen to start. HAND Sentry (HS) will be my main focus to start, and I start with a stun from Black Widow and Captain Marvel’s ultimate. While I knock about 30% of his health off, there is no avoiding the stealth to his allies which makes this difficult… I kill off HS and he revives at minimal health, yet it still take 5 hits to kill him a second time. I am now focusing on low-health HAND Archers since Nobu and HAND Sorceress (HSor) are in stealth mode and Iron Fist (IF) is kinda on his own. The stealth and defense up buffs wear off and I pivot to instead attack Nobu and HSor. Once 4 enemies have died, reinforcements arrive in another Iron Fist, 2 HAND Assassins (HA) and 2 HAND Bladesmen (HB).

Now 14 of 18 enemies remain, I have a team at full health and they have 9 bad guys on the board. I continue to work on eliminating the HSor then likely the weaker enemies health-wise to get some kills. Several attacks later I lose Thanos, but have Minn-erva ready with an instant revive. I kill off one HA and I am working on the other, if nothing else but to remove the heal block defuff possibilities. After the other HA is dead I start on the 2 Has as I have just them and 2 IFs left on-screen. A HB is down and immediately after I get more enemies – Nobu, Elektra, another HS and a HSor. After I kill the final HB, a HAND Archer appears and the final 7 enemies are all in front of me. HS and HSor will be the main focus and I will leave the two annoying IFs for the end. Nobu’s minions play right into the strength of this team – easy kills – so I continue to heal up as I work on chipping away at HS. At about 70% health, HS grants stealth to all, but I feel like this battle is in HAND. Sorry, pun intended.

Now 7 of 18 enemies remain, all on-screen, and I am chipping away. First the HS goes down after several hits, then I go after a HAND Archer since HSor is in stealth and Nobu is feeding this team health and cooldown reduction. From here to the end it is just chipping away, leaving the 2 IFs and Nobu for the end. The SHIELD minions are a nice boost and help me heal and land stuns on the IFs while the Nobu minions make it easy for me to defeat this board and move on with cooldowns reset and a team at full health.

My reward is 200k gold and 2k Mega Orb Fragments.

Day 1, Battle 1 (1 total): Captain Marvel, Star-Lord, Thanos, Minn-Erva and Jessica Jones (260k) – Using my go-to FTD team to spam ability energy I was able to withstand the stealth bombs from the Hand Sentry each time and focused on adding the blind debuff on the Hand Archers as much as possible, and removing the Hand Sentry and Sorceress from the battle as quickly as possible. In the end I was able to get a full clear but did have Minn-erva a hit or two away from dead on a couple of occasions, so the win was not easy.