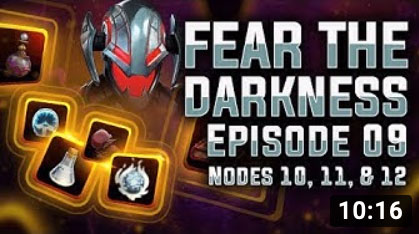 Also be sure to check out the video linked in the graphic below from Marvel Strike Force Envoy YouTuber Khasino as he reviews Fear The Darkness Battles 10, 11 and 12 in the video linked. Note that Khasino’s content is Rated PG-13 (language).

07.06.19 – This battle looks like it will be tough as 37 enemies await me. I start with my regular five against a team of 6 Hydra enemies plus Red Skull. Given what I have learned about Red Skull in the Ultimus VI Raid and how he passes ability energy around, he will be my main target and I am able to land a stun from Black Widow early, but two Hydra Armored Guards taunt to mess up my plans. I get RS down to 50% health when I realize that he calls Hydra minions into battle which has me changing my approach… Now the Hydra Rifle Troopers (HRT) and Hydra Snipers (HS) will be my focus given they are the offense on this team. While this will likely prove to be a good strategy, I am taking a lot of short-term damage trying to eliminate the enemies. A well-timed heal from Minn-erva has be back near full strength, and as I continue to battle I get the on-screen match-up down to my 5 (plus SHILED minions) versus 2 Hydra Armored Guards (HAG) and Red Skull. I take one HAG out leaving me with a 5 v 2 and I must say I am surprised there are no reinforcements incoming. The second HAG takes maybe 50 basic attacks from my team before I kill him and then two hits later RS is down causing a new wave of enemies to attack.

Now 30 of 37 enemies remain and I am at full health with SHIELD minions helping me out as my new enemies include Yondu and 6 Ravagers – 2 Boomers, 2 Stitchers and 2 Bruisers. The Boomers and Yondu are going to be my targets because they are all of the offense. Probably 100+ hits take place back and forth before a Boomer is the first enemy to die (not counting minions). More back and forth, but this team does not have the offense to take me out as I kill off another Boomer and a Bruiser as I work to pick them apart. Many attacks later it is just Yondu left against my 5 and finishing him off is easy. The next group of enemies features Red Skull, 2 Yondus, 3 Ravager Boomers, a HRT and a HAG. I fought this group while distracted and walking to fireworks with the family, so it did not go well. What I can remember (as I type this the next morning) is that the firepower of the 3 Boomers and 2 Yondus with Red Skull passing energy to everyone made this battle very difficult and I lost Minn-erva rather quickly. That led to the rest of the team falling without taking out a single enemy.

07.07.19 – 22 of 37 enemies remain and 7 enemies are on-screen to fight. Using my standard five for this battle once again, I have just one enemy below 50% health, a Boomer, so he is my target. The Boomer is removed quickly, along with a couple of Ravager minions, and a AoE puts the HRTs below 50% health so he is next on my hit list, but his HAG buddy taunts. I dispel with Captain Marvel and more Ravager minions arrive as my health gets low. I take them out, and the the HRT to get the health I need to survive, and a well-timed heal from Minn-erva has my team back at near full strength. Now 20 enemies remain with 5 on screen, and all but one have red or yellow health. Red Skull is my target to eliminate the ability energy he generates, and once he is down the others are easy to pick off leaving the HAG for last. Since he has no offense I am using all basic attacks, so it takes 20-30 hits, but finally he is down.

The next wave of enemies is another group of 8 with 3 Yondus, 2 HAGs and 3 HRTs. Now 15 total enemies remain, so while the end is in sight, this will not be easy. I target a HRT first to try and eliminate some offense. Navigating AoE attacks and the taunts of multiple HAGs is the challenge with this group. I lose and revive Black Widow and get one HRT into the red just as another round of attacks weakens my entire team before Fury dies just before a ME heal. I lose BW once again as I kill off the HRT and some Ravager minions leaving a 3 vs 7 on the screen. Fury is revived just before another round of AoE attacks from the HRTs and my entire team is below 50% health. Now Thanos is dead after Boomers are called by the Yondus but Captain Marvel’s ultimate kills off the HRT to keep me hanging in. Black Widow is revived only to die again, but she takes a HRT out with her leaving just the 3 Yondus and 2 HAGs. Yondu’s offense is too much in this battle, so I have to target at least 1-2 of them quickly to survive this grouping. While the battle seems to keep me skating on thin ice, I catch a few breaks and am able to finally take out a Yondu, and revive both Black Widow and Thanos leaving a 4 vs 4 battle. A few hits later and a revive of Fury and it is 5 vs 2 with the HAGs as the only enemies left. What I did not account for was the reinforcements as having 2 HAGs will be a real pain to work around.

Now 9 enemies remain and 6 are on-screen with Red Skull, 2 Boomers and a Stitcher having joined the 2 HAGs at the party. Given Red Skull is the engine that makes this train run, I feel I have to navigate around the others and take him out first if I want to clear the board today. I get RS to yellow just as a HAG taunts, but I am able to dispel with help from the SHIELD minions of Fury which are much more helpful in this battle than most. Finally ME deals the kill shot on Red Skull making this battle look better for me. 8 enemies remain and I decide to remove some offense so a Boomer is the target. Once he is down the remainder of the enemies appear – another HAG and 2 Yondus.

7 of 37 enemies remain with 2 Yondus and 3 HAGs all at or near full health, a Stitcher at about 35% and a Boomer at maybe 15% health. I feel the need to go after the Boomer first, then a Yondu if I want to complete this battle, but the HAGs will undoubtedly make this very difficult to navigate. I take out the Boomer rather quickly leaving 6 enemies and now the challenge is getting to the Yondus around the HAG taunts and Stitcher heals. I work around some taunts and Yondu AoE attacks and somehow the Stitcher is dead leaving 2 Yondus and 3 HAGs. ME heals while a HAG is taunting to kill off a Yondu and this looks better by the second, albeit annoying as heck. I am able to work around taunts and kill off the other Yondu and the win is no longer in question, only the timeline of how ling it will take. I put the game on auto while I type for 50 hits or so, then once I kill off the second HAG I am back to manual play with basic abilities only in an effort to setup Mission #12 which I hope to have time to start tonight. The reward for this win is 200k gold and 8k Gold Orb Fragments.

Battles: Failures on the backend of my site and my crazy schedule have made this a difficult to complete update, but in all it took me 5 battles to win this mission. I should have started with the Phoenix team for my first battle to weaken the enemies but I did not, thus leaving my go-to team with Minn-erva and Captain Marvel hung out to dry. My third battle I was able to knock off about 40% of the enemies and my fifth battle I took out the rest using the other battles to weaken them and setup the time-cosuming attacks.