Welcome to the Best Mods for Emperor Palpatine, another article in our series about Star Wars Galaxy of Heroes where we take a look at the best mods for individual characters. While I do not claim to have all of the answers in this game, I do my research and have used every character I write about extensively. These are mod recommendations based on the character’s kit and actual gameplay to help you in your quest to dominate the Galaxy of Heroes holotables. 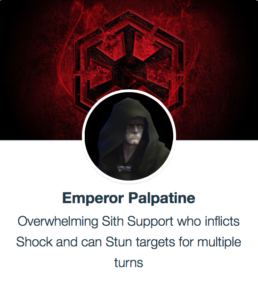 Today’s character to review mods for will be Emperor Palpatine, one of a select few characters who are opened and starred up through legendary SWGoH events. The Emperor of the Galactic Empire is a Sith and Empire character with a fantastic leader ability. Personally, I used Palpatine in the Arena for several months after unlocking him in the first Emperor’s Demise event as I was fortunate enough to open him at 7-stars earlier than most. He later was used in Phase 3 of the Heroic Tank Takedown Raid as part of the Chirpatine strategy when my Guild was working toward unlocking and strengthening General Kenobi. While Palpatine’s value has diminished a lot over time, when he was announced in the Galactic Legend event requirements as needed at Relic level 7 to unlock Supreme Leader Kylo Ren his use increased. But another slip in value came as more and more characters were added at high Relics forcing EA Capital Games to have to make a change to add relevance to Emperor Palpatine in SWGoH. That came in December 2021 with the addition of Mara Jade, The Emperor’s Hand. Let’s take a look at which mods best fit Emperor Palpatine and his abilities now that we have this valuable pawn in the game.

Main Focus: This is a tough one. Emperor Palpatine is rather squishy before Gear 12 and 13 and he is most effective when he Stuns and Shocks, thus Potency is key. In order to get to the Stun & Shock, you need Speed to get there faster. So my main focus is going to be Potency as 1a given the need here, and Speed is 1b. Raising his Potency means that his basic, Lightning Strike, and his AOE special attack, Power of the Dark Side, are significantly more effective and possibly dominant. Add in that thanks to his strong leadership ability, Potency will help him land debuffs which will both heal Palpatine and grant him TM, and when the debuffs expire, he and his Empire and Sith allies gain TM once again. Note that he gains 20% Potency when used as a leader with Mara Jade, The Emperor’s Hand on your team and he assists her basic whenever it is used, and gains Turn Meter based on the debuffs on the enemies when she uses her Infiltrate and Disrupt special, so Potency over Speed by a hair.

Additional Areas to Focus: Speed has to be near primary focus so make sure that if that is not your #1 focus it is close to it. Survivability is also important so go for Defense, Health and Protection secondary stats from your mods, but since the February 2018 rework of Emperor Palpatine added two Zeta abilities, Protection is the area of survivability I recommend. Some of the squishy is resolved with a Zeta on the unique which reads “Palpatine has +50% Max Protection, and, when he inflicts Shock, he gains 5% Max Protection until the end of the encounter.” Palpatine’s Relic upgrade also helps address his survivability with a gain of nearly 17k Health from a Level 7 Relic, which is required to go after Galactic Legend Kylo Ren, but you still want to make sure he is not an easy kill for your opponents.

Emperor Palpatine was a 7-star character on my roster from the initial event to unlock him, and I love the fact that he continued to be one of the strongest plays in Star Wars Galaxy of Heroes for nearly a year, and after the rework in February 2018 he once again one of the game’s best characters. While he has been on a value rollercoaster since then, with Mara Jade, The Emperor’s Hand in the game, he could once again be seen as a one of the game’s most formidable foes. Here is my recommendation for the best mods for success with Emperor Palpatine:

[…] help the turn meter reduction from Thermal Imploder land, however if you run Magmatrooper under a Emperor Palpatine lead, remember that you get a 32% Potency […]

[…] of his newly revised kit, Potency is pretty obvious, however if you run General Veers under a Emperor Palpatine lead, remember that you get a 32% Potency boost. I can see him being used much like Boba Fett is […]

[…] of Tarkin’s special attacks need Potency to be effective, however if you run Tarkin under a Emperor Palpatine lead, remember that you get a 32% Potency boost. Ultimate Firepower is an AoE attack which, in my […]

[…] that if Krennic is used as a leader he grants all Empire allies 25% Potency or if used under a Emperor Palpatine lead, he gets a 32% Potency boost. Krennic’s unique already grants him 10% CD for each […]

[…] Emperor Palpatine will begin with clarification of what his Shock debuff does with the text “Shock: Can’t gain Health, Buffs, or bonus Turn Meter” being added. His Let the Hate Flow special will now read “All other units lose 5% Health and Palptine recovers Health equal to 150% the total amount lost. Palpatine gains 50% Turn Meter for each Shocked enemy. All allies gain Health Steal Up for 1 turn.” The addition being the new buff – Health Steal Up. […]