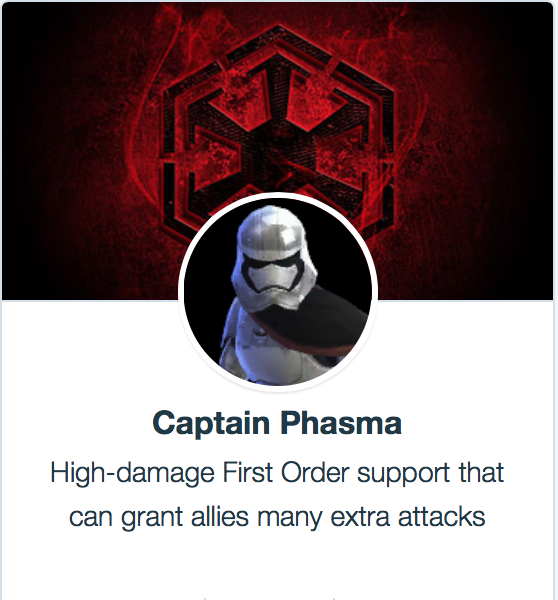 Welcome to another article in our series about Star Wars Galaxy of Heroes where we take a look at the best mods for individual characters. While I do not claim to have all of the answers in this game, I do my research and have used every toon I write about extensively. These are mod recommendations and they are certainly not the only option. However we look to help players maximize their characters in SWGoH and we are always open to hearing your feedback @GamingFansDFN on Twitter if you have a mod setup that works well in your own gameplay. 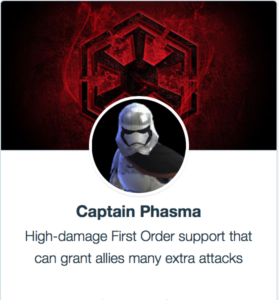 Today’s character to review mods for will be the Captain Phasma. One of the leaders of the First Order, this Dark Side Support character grants allies turn meter and slows opponents down with her AOE. At one time she was one of the best leaders in the game for any squad, which is funny now given how the game’s growth has made Captain Phasma nearly obsolete in 2020.

Main Focus: While every character needs speed (yes, I do say this every time because it is true), Captain Phasma seems best-used with huge speed numbers. Back when Captain Phasma was relevant, former SWGoH GameChanger and YouTube creator Smithie D made a video of Heroic AAT dominance by the First Order, with Captain Phasma at a then whopping 200+ speed. Again, this shows how far SWGoH has come…

In today’s SWGoH with Relics and 6-dot mods, Captain Phasma is not terribly important to any endgame player except for the fact that she is needed in the Galactic Legend event to unlock Supreme Leader Kylo Ren. With the addition of Omicron ability upgrades in SWGoH, Captain Phasma has become not only relevant but borderline valuable in Territory Wars making Speed an even bigger emphasis. Thus, I recommend a set of four Speed mods with high Speed secondaries for sure on Phasma.

Additional Areas to Focus: Speed, Potency, Critical Chance, Critical Damage and survivability. Her basic, Onslaught, lands Defense Down on a critical hit making the use of Critical Chance mods or secondary stats important, and Potency helps land the Speed Down on the AOE special attack Fusillade. Speed will help her get to her turns faster, and the ability to grant TM to her allies is important, but I would not use Speed mods on this character and instead get the Speed boosts from the secondary stats. CC and CD will help her hit harder, as will additional Offense, but note that Captain Phasma’s Relic upgrade is rather balanced and not overly heavy on any stat increases. As a result I recommended a blended approach when modding her to best support her First Order teammates.

In-game Mod Recommendations: Speed & Potency. The in-game recommendations are very important to follow for new characters since the developers are focused on just 1-2 new characters at a time when they release them. However, for older characters, they had to review 100+ heroes all for the Mods 2.0 release, and in fairness they got a little sloppy on many of the suggestions. For Phasma the Speed recommendation is more relevant today than ever before, so Speed & Potency are where you want to focus. Keep checking here at Gaming-fans.com where we continue to review our Mod Guides and message us anytime @GamingFansDFN on Twitter if you have a character you want us to review mods for.

Players used to be able to go a lot of different ways when modding Captain Phasma, but as the game as evolved it is clear that Speed and Potency are the most important stats to focus on for this First Order leader. Add in an Omicron upgrade for Territory Wars and Speed becomes even more important. Here is my preferred mod setup for Captain Phasma:

SWGoH: Nukin's Mods for the First Order & Stats to Focus On - Gaming-fans.com

[…] KRU is just the second First Order character in the game with a leadership ability, along with Captain Phasma. Kylo Ren Unmasked and First Order SF TIE Pilot were first announced by Gaming-fans.com & our […]

I feel like Phasma just gets no love from anyone. But if equipped properly can be dominant. I used the setup you suggested and was able to unlock 7* BB-8 because of it. Thank you, sir! 🙂

Good to know Dan, I am about to attempt to unlock my BB-8 using his suggestions as well. In my early days of SWGOH, Phasma was my leader in arena, which helped keep me near the top on my come comeuppance.

Phasma still has her uses, but until she gets a rework her Arena days are over. That said, she does crew Kylo’s command shuttle, and as far as P2 of HAAT and the BB-8 unlock, she is more than sufficient.