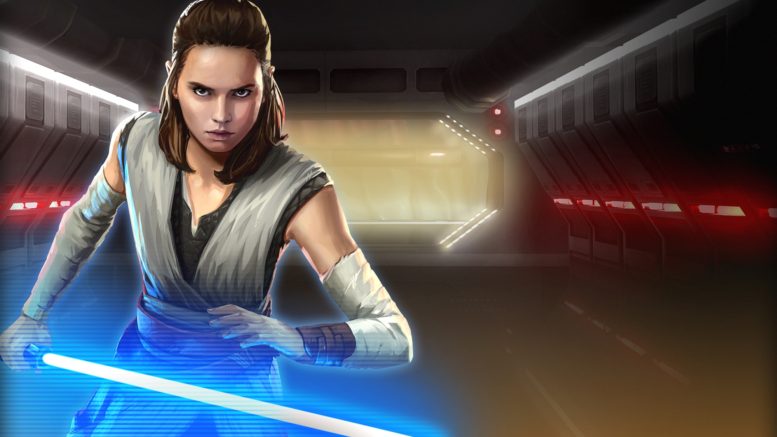 Welcome to the Rey (Jedi Training) mods guide, the latest article in our series about the popular game Star Wars Galaxy of Heroes where we take a look at the best mods for specific SWGoH characters. While I do not claim to have all of the answers in this game, I do my research and have used every toon I write about extensively. These are mod recommendations and they are certainly not the only option. However we look to help players maximize their characters in SWGoH and we are always open to feedback if you have a mod setup that works well for your gameplay. 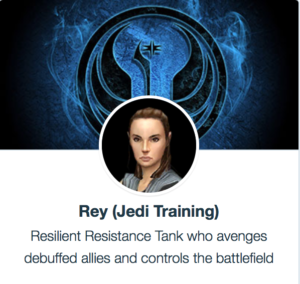 Today’s character to review mods is sequel trilogy star Rey (Jedi Training). In the early days of Star Wars Galaxy of Heroes one of the first METAs (what does META mean?) we ever saw was the Rey META – the use of Rey (Scavenger), and a fast Rey, was the difference in winning an losing in the Squad Arena. Since then SWGoH has changed a lot, as the community looked to Rey (Jedi Training) to change the CLS META that dominated August through December of 2017. RJT, with her droids beside her, stepped in to adjust the META and in many ways replace Commander Luke and almost completely nullified the viability of the Barriss Offee Zeta in the Squad Arena just days after her introduction to the game. But again, the game has progressed, and now RJT is needed to qualify for the new SWGoH Galactic Legends event to unlock a 2020 version of Rey, so let’s take a look at the best mods for RJT below to get you prepared.

Main Focus: Like everyone in the game, Speed is a heavy focus. With a 140 base Speed, Rey (Jedi Training) is not nearly as fast as the original Rey (Scavenger), but if you are planning to use RJT extensively it makes sense to get her well above 200 Speed through strong secondary mod stats. While she gains a lot of Turn Meter, especially when used as a leader and with a super fast BB-8, Speed is nothing but an asset with this character’s strong kit at any point in the game.

Additional Areas to Focus: Critical Chance, Critical Damage and survivability. My original look at her kit and my use of her now all lean the same way – survivability, CC and CD. At Gear 12+ she has about 47% Critical Chance, so getting her well above 50% from the boost from your mods is easy. Add in that as a leader she grants an additional 30% CC and 30% CD and your crits will be frequent and hit harder. But wait, there’s more! Once she gets to Gear 13 and the Relic for Rey (Jedi Training) is factored in she maxes out at just under 75% CC, so when you get her this high there is no need for CC mods anymore. Keeping her survivability stats high from health, protection and defense is also very important to build on the strengths of her kit. This is notable also from her other Relic upgrades since RJT is a Tank in the game. She gains significantly in Health, Protection, Armor, Resistance (lol), and both Dodge and Deflection chance.

In-game Mod Recommendations: Critical Chance & Critical Damage. Well yeah, I guess. But this is typical CG not really going too far in-depth on mods and trying for a quick solution in Mods 2.0. As I mentioned above, a maxed-out, Relic 7 RJT will have 74.83% Critical Chance and gains 30% CC when used in the leader slot – so if you have her at Gear 13 or above I would stay away from CC mods and use them on other Resistance characters instead. I do not disagree with a set of CD mods, but I would recommend you pair them with a Health set to enhance her survivability.

As I have stated before, as Star Wars Galaxy of Heroes continues to evolve, one thing the dev team does well is matching up the strengths of new characters with their faction. Rey (Jedi Training) was a fantastic addition to the Resistance in SWGoH when she was added, and will likely thrive alongside the new 2020 version of Rey. If you mod her correctly, which I touch on in-depth above, you can have one heck of a good character and team in SWGoH.

Here are my recommendations for the best mods approach for Rey (Jedi Training):

Since an RjT zeta lead supplies +30% crit chance, do you really need crit chance mods? Her kit comes with a crit damage of 150. Add the 30 from her leadership and +36 from a triangle mod and your maxed out at 216, without a set of crit damage mods. Instead of crit damage/ crit chance, why not go with speed/potency?

I will test the Speed mods on here, but I typically save Speed mods for those in the are of 160 base speed – she is 140 and a tank. I could see more health/defense given her high numbers already for added survivability. As for CC, you’re basically making 90% of her hits a crit with 40% base, ~10% from mods and +30% from the leadership, but if she is not a leader you do not get the 30%. At the end of the day it is all about getting good secondary stats for most all of these characters.

What about an offence MOD set?

Great question. I try to stay away from Offense mod sets in comparison to Crit Damage since CD gives a bigger boost to the hits, especially for a toon as high in CC as Rey JT is. Plus, like CD and Speed, Offense mods need 4 to be a full set, so I am hesitant to use them given they take up 2/3 of the mod spots alone and cannot be paired with CD or Speed mods.

And what about potency ? Don’t we need to apply as many defuffs as possible with mind trick ? Esp in P1 of STR.

[…] burn, it seems a wiser move to use that elsewhere. Where Rey (Scavenger) really shines is under a Rey (Jedi Training) lead where critical hits apply the Expose to the enemies. I recommend going for high Critical […]