Kentrocapra is a resource in Avatar: Pandora Rising that is important to the Na’vi. The hunting of Kentrocapra, whether from a Rally or an individual commander on their own, provides the Kentrocapra bones needed to keep your Weapons Hut busy which is important throughout the game.

Kentrocapra bones can be acquired by any commander in Avatar: Pandora Rising who has the Hunter tag, however two commanders specialize in Kentrocapra – Sukal and Zumkana. So who is the best Na’vi Commander to hunt Kentrocapra? Let’s look at their stats and compare. Note that I am only comparing Kentrocapra-specific commanders as general hunters cannot compare statistically at the same levels as those who have a specialty.

Zumkana – Zumkana is an Epic commander who hunts Kentrocapra with +12% at Level 1 of her Shadow Hunt ability and can advance to as much as 39% at solo sites. Her Kentrocapra Hunting Skill ranges from +40 at Level 1 to +150, but both of those stat ranges are even stronger at Kentrocapra Rally Sites. On defense Zumkana adds to all Towers (+4 to +40) and enhances All Troops (+4 to +28) while boosting the Ikran Assault (+4 to +32).

So we ask again, who is the best Na’vi Commander to hunt Kentrocapra? 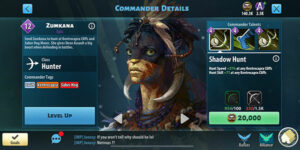 For many of these comparisons we have an Epic commander versus an Uncommon or Common commander, thus making it an easy choice. But like the best Hexapede hunters in Avatar: Pandora Rising, we have a Rare and an Epic commander as the two options for Kentrocapra, thus we see very small stat differences.

On my account I have a strong Zumkana and keep my Ikran Assault strong as well and do not use the Hunting Party very often because of their high cost to us in battle, so Zumkana gets the obvious nod here. Even though the gap is not too large, Zumkana does have better stats than Sukal in every category, so my vote is for Zumkana as one of the best Na’vi Commanders in Avatar: Pandora Rising, and the best at hunting Kentrocapra.

Avatar: Pandora Rising – A First Look with Gameplay by ValleyFlyin

Be the first to comment on "Best Avatar PR Commanders: Kentrocapra Hunting"