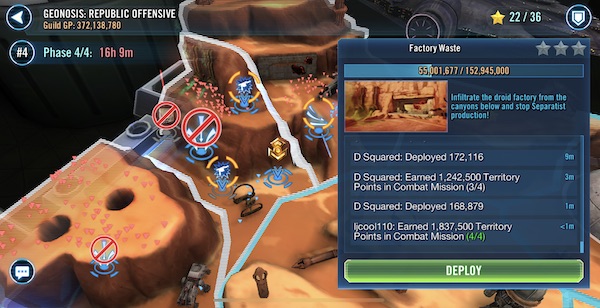 01.16.21 – The battle begins as I face off with a B2, a Sniper Droid, two B1s, a Geo Soldier and a Command Battle Droid. I start with the Heroes Arise on the Sniper Droid to control him, then stun the group, then have GMY remove turn meter from the Sniper Droid before beating the B2 down. I then focus all efforts on the Sniper Droid and finish him off without a turn, transitioning over to the B1 Battle Droids. Spamming the enemies with GM Yoda proves to be quite effective given all of his turn meter gain from his basic. After taking them out I finish off the other two with basics to reset cooldowns as I advance.

The second wave of enemies is a B2, a Sniper Droid, a Droideka, two BX-series Commando Droids and a MagnaGuard. I focus everything on the Droideka, including the Heroes Arise ability, then eliminate the B2 with the AT-TE attack. After this I take advantage of the stunned enemies and get all attacks on the Sniper Droid until it is dead, then work on the BX droids. Once they are down the MagnaGuard is no match for my Jedi as I advance with ease.

The final wave of enemies is General Grievous and Wat Tambor with a B1, B2 and MagnaGuard. I start with a burst attack tack on the B2 and then get stuck behind the MagnaGuard’s taunt despite the stun from JKLS. I take out the B2 but then use the LAAT to dispel and take out the B1 and MagnaGuard. GG does not like this and kills GM Yoda, but with just Wat and GG left I have more than enough to get the win and the 1,837,500 Territory Points that come with it.