With the Lord of Hunger events coming to a close today, and the addition of three new characters to Star Wars Galaxy of Heroes, I found it appropriate that we review the 3rd and final toon, Darth Nihilus. A OP Sith support character, Darth Nihilus is another throwback to the Star Wars Knights of the Old Rebublic games. 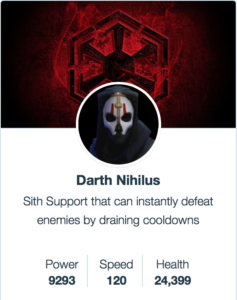 For the sake of SWGoH, Darth Nihilus is another Sith with a Leader ability, albeit a unique one.

Darth Nihilus has a basic attack called Ceaseless Craving which dispels all buffs on the target enemy. Ouch! No more taunt, no more CC up, Nihilus removes it with just his basic attack.

The Drain Force special attack is a AOE which has a 50% chance to increase the enemy cooldowns by 1 (100% chance if already debuffed). This complements Nihilus’ other special attack by reducing the cooldown of Annihilate by 1 for each cooldown increased on the enemies. Speaking of Annihilate, it is an instant-defeat attack. No typos there – “instantly defeat target enemy” it says… Not enough for you? Darth Nihilus also gains health equal to the target enemy’s max health AND it cannot be Evaded. Despite the cooldown of 8, this is a game-changer!

The unique ability, Wound in the Force, inflicts damage over time on a random enemy without debuffs. If all are debuffed, a random enemy then gets a DOT. Then, at the start of each turn Nihilus inflicts health down on the enemy for 2 turns when the Zeta material is used. 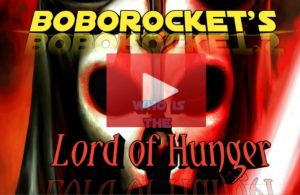 Finally, his leadership ability is an odd one, but I am sure that it will be a strategic advantage in the near future. Lord of Hunger applies only to Sith and removes all protection and turns it into additional health. Sith allies then gain 60% offense (yikes!) and gain 150% health steal. Sith are then immune to healing effects that are not health steal and cannot score critical hits. Interesting. Very interesting…

While I’m not going to analyze the specific mods in great detail today, like in our popular “Best Mods for SWGoH Toons” articles, a quick look at his abilities has me leaning towards Critical Chance and Critical Damage… Ok, if you have paid any attention to the leadership ability you will realize that was a joke. Actually, protection looks like an interesting way to go given it is converted into max health if he is the leader, and a blend of offense and defense seem wise as the defense will be needed when everyone tries to take Nihilus out first in the Arena.

My overall thoughts are that this character will be a major player in the arena almost immediately. Paired with Darth Vader (specifically Zader) and Darth Maul (Zaul), the Sith Trooper and maybe Darth Sidious (Zidious) this could make for one heck of an Arena team. Add in that the Sith Assassin is set to be overlooked in this new trio, and Nihilus with any combo of these toons will be a beast.

How to keep SWGoH fun

[…] February 16th is the latest of these character events as the “Lord of Hunger” Darth Nihilus event details have been released. Four events over the span of 11 days will see rewards being […]

SWGoH: Should I buy the Lord of Hunger Pack? – Gaming Fans

[…] to do enough damage each hit to counteract the healing, kill him before he gets a turn and heals (Darth Nihilus‘ Annihilate is great for this), or to constantly dispel his Heal Over Time […]