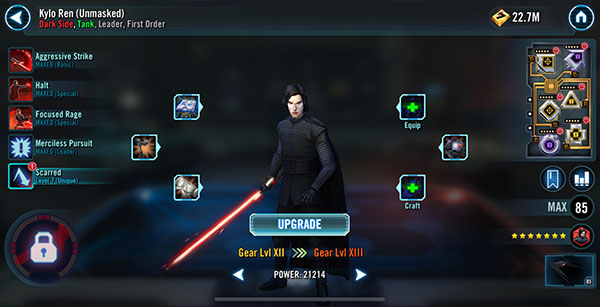 Welcome to the Kylo Ren Unmasked (KRU) mods guide, the latest article in our series about the popular game Star Wars Galaxy of Heroes where we take a look at the best mods for individual SWGoH characters. While I do not claim to have all of the answers in this game, I do my research and have used every toon I write about extensively. These are mod recommendations and they are certainly not the only option. However we look to help players maximize their characters in SWGoH and we are always open to hearing your feedback @GamingFansDFN on Twitter if you have a mod setup that works well in your own gameplay. 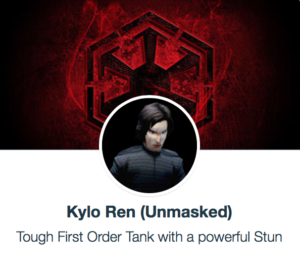 Today’s character to review mods for is the newer version of Kylo Ren, Kylo Ren Unmasked (KRU). Scarred and without his mask, KRU was just the second First Order character in the game with a leadership ability, along with Captain Phasma. Kylo Ren Unmasked and First Order SF TIE Pilot were first announced by Gaming-fans.com & our fellow GameChangers program members in November 2017, but a lot has changed in SWGoH since then, including the announcement that KRU was required at Relic 7 to compete for the new Galactic Legend Kylo Ren. Let’s take a look at the best mods for KRU below.

Main Focus: I always say that every character needs speed, but in all honesty that is not true. So let me revise this by saying 95% of all SWGoH characters need Speed, and Kylo Ren (Unmasked) is no different. With KRU, there are multiple statistical areas that you could focus on – Speed, Critical Chance, Health, Protection and Defense. While my Kylo Ren (Unmasked) is at Relic 3 at the time of this revision, the few First Order teams that I have ever had significant trouble with have all had an ultra-tanky KRU as the leader and a tanky, offensively-driven original Kylo Ren beside him. Given KRU is a tank and the addition of Relics is designed to bring characters back to their natural roles in SWGoH, I am going with survivability in the forms of Health, Protection and Defense as the main areas of focus. His Halt special attack sees Kylo Ren Unmasked gain 10% Health and his unique, Scarred, sees him gain 8% Health whenever he takes damage. A Relic 7 KRU gains over 17k Health from this upgrade so be sure to read up on Kylo Ren Unmasked’s Relic. In addition, under his leadership all First Order allies gain 5% Health and 5% Protection when they gain a status effect, so build both stats up to improve his survivability.

Additional Areas to Focus: Speed, Critical Chance, Critical Damage and Potency. Given Kylo Ren (Unmasked) has a leader ability that grants his First Order allies +30 Speed with a Zeta, beefing up KRU to well over 200 Speed, from the secondary mod stats, is a wise move. Note that the Zeta on KRU’s leader ability has historically been one of the most important Zeta abilities for the First Order in SWGoH, so be sure to invest this valuable enhancement wisely. CC is important because his leader ability reads, “When a First Order ally scores a Critical Hit, they gain 20% Turn Meter,” and as we all know, Critical Damage goes hand in hand with high CC. His leader ability also grants First Order allies another 40% CD, so putting a CD-focused triangle on KRU is a must. Finally, his basic, Aggressive Strike, can inflict Tenacity Down on enemies, so a bit of added Potency is also recommended.

Note that for endgame player era, KRU is used as one of the tanks, along with First Order Stormtrooper, to protect Supreme Leader Kylo Ren. In this role he is obviously not used as a leader, thus the CC and CD are not as important. In this role Kylo Ren (Unmasked) needs as much survivability as possible, and I would focus primarily on Health given my KRU has a 31.75% Health Steal at Relic 7.

In-game Mod Recommendations: Defense. While I am not convinced that Defense mods alone are the best way to go, working in a set or two of Defense mods that are high in Speedand Health are certainly not a bad option. However, with the introduction of Relics, KRU is more Health-focused with that strong Health Steal stat.

The ideal mods setup can differ from person to person and the key numbers come from the secondary stats. KRU is a character that, at one time, I saw as an ideal for a few of my otherwise poor fit mods with high CC and moderate Speed. However with Relics bringing Kylo Ren (Unmasked) back to the tank he is designed to be, it seems high survivability is the best route in today’s game. Thus, here is my preferred mod setup for KRU, but a more offensive approach may be better for your gameplay.

ok after looking at Matt(UMK) He looks like he could be a big help to solo rancor. what is your thoughts?

The mod suggestions are spot on. Matt is a far superior leader for First Order than Phasma is these days. He works best with all the oddball mods that aren’t worth throwing away, but aren’t really ideal for other toons. I went for Health, Potency, and Critical Chance sets. I got decent speed on him from secondaries but also a lot of protection from secondaries as well. Even at G10 and only his leadership zeta’d at the time of this writing, he’s doing good.

[…] higher Health number will maximize his abilities. Of course if you are running him in a team led by Kylo Ren Unmasked, he will get a 40% CC and 30 Speed boost (with a […]