On Thursday, May 4th, Star Wars Galaxy of Heroes will launch a new event called Daring Droid with the opportunity to unlock the iconic Star Wars astromech droid R2-D2. Somehow included in a variety of storylines throughout the canon Star Wars timeline, R2-D2 appears in each of the numbered Star Wars movies. Here is what we know about R2-D2’s SWGoH event:

The versatile Support Droid, R2-D2, has been seen on the Death Star! Gather your best EMPIRE forces and defeat the famous crew of the Millennium Falcon to capture R2 in THE DARING DROID, a very rare multi-tiered event!
Can you foil the REBELS’ plans and capture this legendary astromech?

So we’re using our Empire toons to take on a slew of Rebels, likely Han or Stormtrooper Han, Leia, Chewie (not Clone Wars Chewbacca?), Luke (with a gun or lightsaber?) and presumably Old Ben. Sounds reasonable (especially with no Wiggs!) enough. Much like the Yoda and Emperor Palpatine events, R2-D2 will unlock at 5-stars and beating Tier 6 and Tier 7 gets you the shards for that star upgrade.

Look, none of us have even seen the event yet, but on paper this looks rather straightforward. Since we have time to prepare, here is my suggested lineup for the event based on availability of characters for the average player: Emperor Palpatine (lead), Darth Vader, Royal Guard, Magmatrooper, Grand Moff Tarkin. While those with TIE Fighter Pilot maxed or close to it will undoubtedly use him, I am basing this off of the availability to the majority of players. 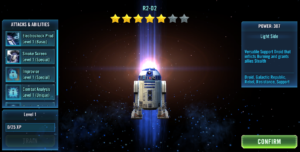 Palpatine is available through the Emperor’s Demise event, Darth Vader from game achievements, Royal Guard from hard nodes, Cantina nodes and Bronzium packs, and the other two are an easy farm with Tarkin in the Squad Arena shipments and Magmatrooper in the Galactic War shipments.  The Cantina shipments also have Stormtrooper available, but few would be as foolish as I and put their resources toward him given his overall lack of effective use in SWGoH.

Using Emperor Palpatine as your lead, both Darth Vader and Grand Moff Tarkin gain huge value. Both will gain massive turn meter after inflicting debuffs on the Rebels – Vader with his Force Crush and Tarkin when using his Intimidation Tactics. In most cases both will be basically granted an extra turn after using this special ability, thus adding additional attacks throughout. Tarkin’s Intimidation Tactics also adds additional debuffs to Rebel enemies with the Speed Down debuff, and it is safe to say that these Rebels will be fast, so he seems like a very good play for the R2-D2 event. In addition, Magmatrooper’s Thermal Imploder reduces enemy turn meter so those not using TFP in this spot can benefit.

Below are the Mod Guides for all 15 Empire toons in SWGoH in advance of the second running of the Daring Droid R2-D2 event. Comment below if you have any questions on any of these characters or the event itself.

28 Comments on "Daring Droid: Tips for Success in the SWGoH R2-D2 Event"

Integrated Xbox Wireless connectivity – Connect directly to your Xbox Series X|S or Xbox One just like a wireless controller, and start gaming in seconds…